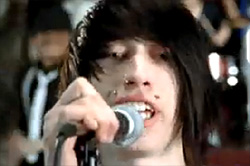 ♠ The weather has been damp and rainy all week, to the point where my lawn is so oversaturated that I sink two inches into the turf when I go out to get the newspaper in the morning.

♠ Speaking of oversaturation, if I have to hear Metro Station's "Shake It" on the radio one more time I'm going the shake the moles right off the lead singer's face. Any time your song repeats the same word five times in a row, you need to learn more words.

♠ Worse than "Shake It", though, is Lady Gaga's "Poker Face" which not only has a mind-numbingly repetitive chorus, but also uses Autotune. I honestly believe that this song is just an inside joke of the sound technician who makes "poker face" sound like an obscenity in the robotic middle section.

♠ If I had a robotic middle section, I would trick people into chest-bumping and send them flying across the room. I would also incorporate a 100% efficiency waste recycling organ that would permanently eliminate the need to take pit stops ever again. They would have to rename the book, "Everybody Poops, Except BU".

♠ I really don't understand why the Everybody Poops book is so popular. It has no overarching storyline, is full of exposition without conflict or resolution, and the characters are usually full of it. In these regards, it's kind of like the third season of LOST.

♠ LOST isn't great right now, but it isn't bad either. I haven't been surprised at all in the past few episodes, and I feel like they're taking too much time explaining the time travelling aspects of the story to the viewers, but I'm still going along for the ride. The smart bets are currently on the last season of LOST devolving into metaphysical chaos like the end of the Blazing Saddles, and the LOSTies will jump through time and end up in the ALIAS universe fighting Melissa George's eyebrows (except for Sawyer, who accidentally skews off and ends up on Gilmore Girls).

♠ There are no big plans this weekend, although there are only 183 days until our wedding. That's enough time to redo fifth grade and still have a few days saved for snow.