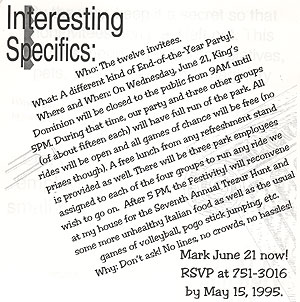 ♣ On April 1, 1995, twelve of my close friends received an invitation to an end-of-the-year party. Well-versed in my rambling multi-page invitations and penchant for planning months in advance, invitees were surprised to discover that this party would take place at King's Dominion on a day when the park was closed to the general public. They were more surprised when the last page revealed it to be an April Fool's joke. My dedication to this joke was so strong that I actually put the invitations into the mail on varying days in advance to make sure that everyone (even clowns in Arlington and Fake Alexandria) got them on the 1st.

♣ In 1998, a girl I knew solely from the Internet confided that she was in love with me over ICQ. "Is this an April Fool's joke?" may have been my shocked, unfortunate reaction, which is never what you want to hear in that situation. We talked it out the next day, though, and I normalized my Canadian relations.

♣ I released Augmented Fourth on April 1, 2000, although the only cruel joke in that scenario was the statue with the moveable arm that seemed to unlock a secret passage in the house where inventory was forbidden, but actually did nothing at all. Players were still stuck here over a year later. 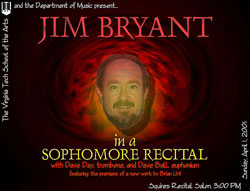 ♣ April Fool's Day in 2001 was the sophomore recital of Dave Day and Dave Ball (and the world premiere of Clown Facades). For this occasion I created an alternate version of their recital poster, featuring their accompanist, Jim Bryant.

♣ In 2003, I changed every word of my homepage to be "bork" and infinitely looped a clip of the Swedish Chef singing. I also gave a ridiculously hard dictation question to my ear training students, although most of them were too street-savvy to fall for it. One student did try to visit our Blackboard class page to study before the exam, and ended up at Bork-fest instead. She was rather confused.

♣ Last year on 1 April, Rebecca and I were setting foot in London for the first time ever. Though we didn't feel that our presence was any sort of American prank on the British, we did get to say "Cockfosters" in polite conversation all day long.

Your turn! Share your April Fool's Day memories in the Comments section!