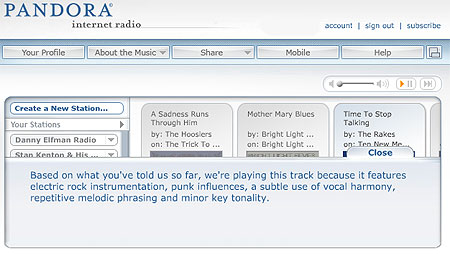 Pandora.com is a free Internet radio station that learns what sorts of music you like over time, and tailors future songs to those guidelines. Starting up with Pandora is simple: you give it the name of a band or a song that you enjoy and, through the Music Genome Project's research, it will play other songs that are similar in some way. You can choose to "like" or "dislike" a song at any time, and this choice is remembered for the future. The reasons for its musical selections are as varied as "songs by the same band" to "songs with fast string accompaniments and triple meters".

When I first started out, I tried to put all the bands I liked into a single station, which confused Pandora into thinking that the Cardigans and Muse had something in common, but I soon learned that I could get better results by creating a separate station for each particular genre. With too much variety, the number of songs played on a station is minimal, so you start to hear the same tunes over and over. Now, I have a harder rock station, a station for chicks that sing (which, amusingly enough, plays lots of Jack Johnson), one for movie tunes, and a couple for different branches of jazz. I have not tried searching for classical music yet.

Here are a few samples of songs that Pandora recommended from my "chicks that sing" station (which I created by selecting Wallis Bird, KT Tunstall, and Ingrid Michaelson), that I would never have discovered any other way:

A Fine Frenzy - You Picked Me

Pandora also makes it easy to purchase new music -- if you stumble upon an unfamiliar tune, you can view information about the song and its artist, and bookmark it for later. At any time, you can view a list of all your bookmarked songs and download them in one fell swoop from iTunes or Amazon MP3. This is quite possibly the smartest feature ever.

Pandora is not perfect -- my biggest complaint is that it's too easy to accidentally close Firefox and have to restart the radio station. Ads have slowly become more intrusive to the point where you now get at least one uninterruptible audio ad per session, and the music stops playing if you don't touch your computer for an hour (making it annoying if you want to use it as background music). However, these are small prices to pay for a free service, and you can completely eliminate both issues by subscribing for $36 a year. If XM Radio continues to go into the pooper, or goes bankrupt, I might just end up doing that.

Attack of the two-nosed bunnies