♠ Happy Birthday to my Mom who turns 28 today! Yes, she's one year younger than I am, either because there was a skew in the space-time continuum resulting in 1985A, she is curiously aging in reverse, or "the island is like a skipping record".

♠ If I could travel through time, I would just go back to yesterday and prevent myself from smashing my hand against the doorway while running down the hall, which resulted in a divot of missing skin from my index finger -- it now looks like a roll of cookie dough attacked by a spoon.

♠ I didn't take a picture of my injured finger because I posted a picture of moldy bread yesterday AND a link to the meth head gallery, and there's a gross picture weekly quota here at the URI! Zone. On a similar note, I'm very far behind my goal for "pictures of attractive people" and "pictures of bacon", so expect more of those pictures in the future. 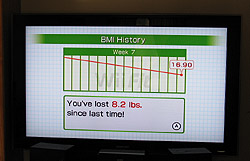 ♠ Speaking of goals, I've been using Wii Fit off and on over the past month (borrowed from Mike in exchange for Six Feet Under) and continue to miss the two-week goals I set for myself. In fact, the program now thinks I'm a malnourished east African child hovering just over 90 pounds. For my next goal, I said I wanted to gain 16 pounds in two weeks, which I'll probably do by picking up Booty.

♠ The resident cats and the two visiting gay brother cats are getting along just fine now -- it only took two days this time, and Lake has only honked on the carpet once. 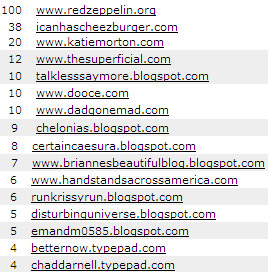 ♠ Because of work, a cat honking on the carpet was probably the most exciting thing to happen this week. If you're looking for excitement, visit some of the blogs in the sidebar to see what other people in the world have been up to, like Brianne who is now a Virginian, or Katie Morton who finished writing a novel.

♠ Have you ever wondered where people go after visiting the URI! Zone? The chart on the right shows the relative popularity of blog links from the past couple weeks. I think the 100 next to redzeppelin may be a miscalculation though, because there's no way that Chompy is cooler than cats talking in broken English. I'm guessing Mike clicks his own blog multiple times a day to inflate the numbers -- that's why his business cards say, "Mike Catania -- Performing SEO".

♠ Plans for the weekend include in the inaugural mowing of my lawn to kick off the spring season of being a home-o(wner) and a trip to Maryland on Easter to see part of Rebecca's extended family. I also have another Amazon shipment of singing-chick-CDs arriving this afternoon which should lead to more Review Days in the coming weeks.

Asians should have simpler names