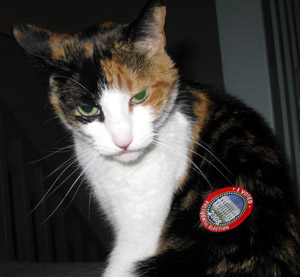 I left the house at 9:42 AM yesterday to perform my Honda Civic1 duty by selfishly voting against new fire houses in western Loudoun County. Although I brought a book for the anticipated wait, there was no line, and I was out the door and back at home by 10 AM.

It was slightly harder for Booty and Amber (a.k.a Fernando and Alexis Uri) to vote, since I had to convince the voting officials that they were dependents born in 1989 with an uncontrollable furry condition, and that their silence was because they did not speak English (not uncommon in Sterling). Nonetheless, they soon voted and were presented with the obligatory voting stickers which are highly prized because all voters are twelve years old and own Trapper Keepers. Personally, I would prefer that any unused campaign funds be donated into a Voter Steak Fund for a post-election party sponsored by the loser.

Although I felt like an utter tool for doing so, I turned on the talking heads around 7:30 PM at the lowest volume, and watched the results come in IN REAL TIME while doing more useful things. Some results actually came in faster than the speed of time, since most networks used complex zero division formulas to call states early (MSNBC called Pennsylvania for Obama around 8 PM last Thursday). I don't fully understand how a state can be won with 0% of the precincts reporting, but next week's PBS special narrated by President Mugabe should shed some light on that. 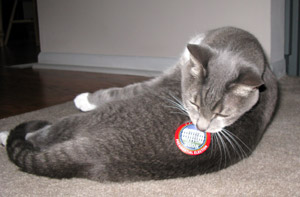 MSNBC (which I only watched because it was the only one on over-the-air HD) also spent half of their program ogling over their virtual reality election room where the token comely female anchor walked around on a green screen while animated charts and graphs soared around her and her co-anchor joked about giant blue bars flying at her face. Because the results appeared on the screen immediately, the anchors had to constantly remind the idiots in the audience that "TOO EARLY TO CALL" meant that there were no votes reported yet while "TOO CLOSE TO CALL" meant that the candidates were in a dead heat. (The poker term, "TOO SCARED TO CALL" was not utilized).

I went to bed around 10:30 after they prematurely called Norway for Obama, so I didn't get to watch Chevy Colorado fall. I still received first word of the new President-elect in the form of fireworks and cheering in my solidly-blue neighbourhood full of illegal immigrants sometime around midnight. Then again, it might just have been MS-13 gunfire.

1: In an effort to generate new advertising revenues, several major companies have purchased dictionary words on my blog.

And God did smite the cows

In this economy, even sex doesn't sell

Canadians play "Grab The Wallaby By the Tail"