When I was younger, I was a bona fide athlete in top physical condition. Evidence of this can be found in the December 1992 issue of Sports Illustrated for Kids, which showcased the strenuous activity of Table Top Games -- not the nerdy, Dew-fueled games of dungeons and wizards, but real feats of physical strength with balls and goal lines and protective gear. 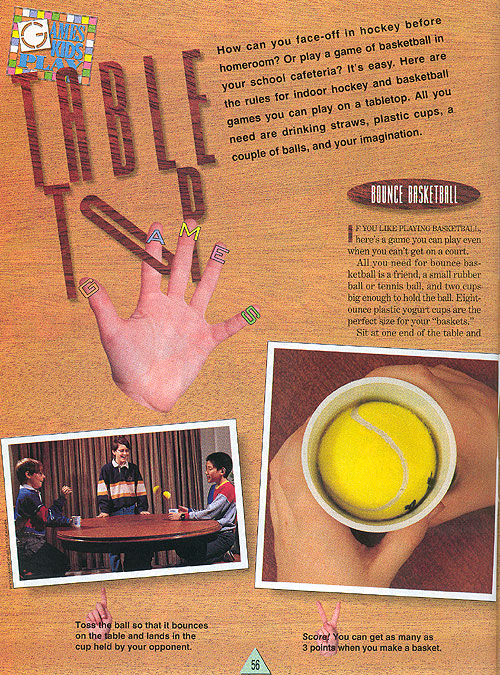 For the sake of full disclosure, we were not called upon by the magazine for our skill at bouncing a tennis ball into a cup. The photo opportunity was set up by the mother of someone in my Boy Scout troop, which was sufficiently ethnically diverse.

So on a rainy Saturday afternoon that would otherwise be spent biking for miles around Alexandria (or alternately, the house of the girl I had a crush on), I went to the townhouse of Richard Grimes dressed in a po po platter of primary colours (at the behest of my dad, who emphatically decided that a colourful shirt would help the photographer adjust his balance levels in the days before Photoshop).

The hardest part about "Bounce Basketball" wasn't getting the ball into the cup -- it was repeating the bounces over and over until the photographer could get a crisp action shot with every kid smiling. At least five other wannabe movie stars were at this three hour shoot, and only these three photos passed through the Ugly/Frowning/Fat editing filter (because apparently it's irresponsible to show fat kids playing games at a table when they could be sitting on the couch playing video games and sparing their parents' rickety chairs). 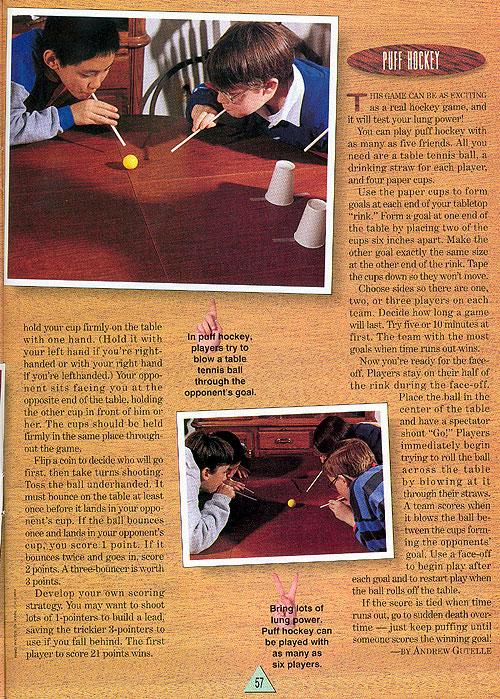 After "Bounce Basketball", which obviously took someone two and a half minutes to invent (but helped improve the future Beer Pong skills of children everywhere), came "Puff Hockey". Although no real life skills can be gleaned from holding a straw between your thumb and forefinger and taking gentle puffs, it was fun nonetheless.

Initial attempts at playing the game failed because one kid kept blowing over the goals. We solved this issue with Boy Scout perspicacity, reaching into our kits for the emergency Scotch tape. Another player then showed a continued lack of control by blowing the ball off the table as if he were trying to push a softball through fifty feet of vacuum tubing. (A similar situation occurs when badminton players try to play tennis).

After time wasted on recovering the ball and telling the players near the camera to stop blocking the ones in the back, the photographer finally gave up and had us pose without actually playing the game. The bottom picture is an example of this fakery.

Police haven't said what type of sandwich was involved

Inmate who escaped returns on his own