After getting the motor in my heating system repaired, I spent Halloween evening at Rebecca's house eating Halloween Party leftovers and watching The Illusionist, which is about as close as you can get to a Halloween-themed movie in a cabinet full of chick flicks. We ran out of candy fairly early in the night, and got to employ the classic child molester technique of turning off the porch light to signal the candy shortage. The next door neighbour tried to put a bowl outside with a TAKE ONLY ONE sign, but that just proved that today's kids are incapable of counting to one, since the bowl was long depleted by the time I arrived.

Saturday was a low-key day filled with raking and gaming, and in the evening we traveled to Winchester for Emily & Matt's going away party. Air Force bases are set up in out-of-the-way places like Oklahoma because inexperienced pilots crash a lot, and the military wants to make sure that nothing of importance is lost -- my proposal to turn all of Maryland into a giant base is still under review). All five Spellerberg sisters were present, as well as all 8 of their kids -- it is left as an exercise for the reader to name them all from oldest to youngest. 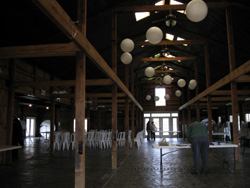 We came back from Winchester that night to enjoy the extra hour of sleep from Daylight Losers Time without being trampled by early morning kids, but went back out to Purcellville on Sunday to meet Rebecca's cousin's family. Sunday afternoon was slated as a whirlwind winery tour, both for imbibing and weddinging purposes. The first one we visited was the Bluemont Winery, which came with a nice view, decent prices, and a reception area where they were apparently recreating the planetarium from The Dark Crystal.

From there, we hit Breaux, Hillsboro, Doukenie, and Loudoun Valley in quick succession. Their wines were good (with Breaux's 14-bottle tasting being the most cost-effective), but they all lacked dedicated indoor areas. Since Rebecca's friend recently got married on the day of Hurricane Hannah, tents were not high on the list of wants. Her niece did enjoy the goose poop at Doukenie's lake, although I feel like you wouldn't want to get married at a place that almost sounds like dookie. 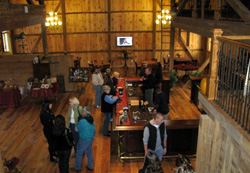 The last winery on the tour was Sunset Hills, which had a really nice reception / tasting area but might be a little on the small side without some creative seating techniques. Luckily, I was a pro at the old game, Sokoban, so I discovered extra nooks and crannies where you could seat the people you don't really like but feel obligated to invite. Also, the bathroom seated 3.

After dinner at Main Street Wings in Purcellville (a little dry, but with good sweet potato fries), we returned to the fringes of civilization in Sterling and got ready to begin the month of November (also known as A Month of Thanksgiving Dinners).

How we used to vote