T-Pain Cranks Out Hits Thanks to Auto-Tune Software 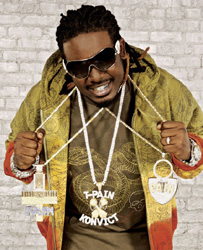 I have always been of the opinion that the increased popularity of the Auto-Tune effect was one of the worst things to happen to music since they gave TATU microphones. The effect first gained notoriety with Cher's dance hit from the 90s where she asks the audience if they believe in life after love, suffers anterograde amnesia, and then asks continuously for another four tortured minutes -- if repetition is the key to Western music, this song must be one half of our da Vinci code (with the other half being "Funk Soul Brother").

"Every time I hear somebody singing one of their songs, it sounds like them singing karaoke of one of my songs," T-Pain says . . . "Don't think I'm not going to hear it when you take that whole style from me. It's pretty much everybody; they're taking the sound I came out with, which was real different, very distinctive."

If you often write for five saxophones in open-voice harmony and shadow the bass line with a vibraphone, you might be able to make a claim about having "a sound". If you sang into a box and turned a knob to the right until it couldn't go any farther, you don't have a sound -- you have a cheap effect that even a cow could produce if it had opposable thumbs.

The chart-topping Auto-Tune converts Lil Wayne and Kanye West are given a pass by T-Pain, having asked their occasional collaborator for his blessing to use the effect. ... "If you don't like autotune," West wrote on his blog earlier this year, "too bad cause I love it."

Kanye's application of the Auto-Tune effect can be heard in the recent single, Love Lockdown

(200KB MP3), an instantly forgettable plate of sheep tripe which tries hard to be minimalistically artistic, but ends up as a poor man's version of "Drop It Like It's Hot". Its one saving grace is the fact that, for an all-too-brief four and a half minutes, you don't have to experience Kanye believing that he can rap.

The great irony of the Auto-Tune explosion is that the software that's now being used to distort vocals in an intentionally obvious, attention-getting, over-the-top way was originally created to do something stealthy in the recording studio: correct pitch problems.

The software was created by a composition major from Rice University, Harold "Andy" Hildebrand, who admits that he doesn't listen to pop music. He created the Auto-Tune effect twenty years ago and then dropped it on an unsuspecting public without caring that it might make Cher popular again. (It is standard operating procedure for composers to create things without worrying about the people who will later have to deal with them -- just look at any one of my wind band arrangements). 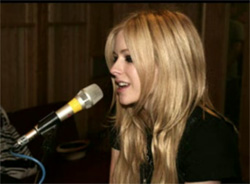 Antares is releasing a discounted, stripped-down version of Auto-Tune this month to coincide with the release of T-Pain's album. Whereas Auto-Tune plug-ins typically sell for more than $300, Antares is offering the Auto-Tune EFX for $99 through Guitar Center -- "for the guy who wants a simple T-Pain effect or simple pitch correction," Hildebrand says.

Unless they make this freely available for the recitals of music education majors, inventing an Auto-Tune that anyone can afford is pure bad news, and will only serve to pad out an already burgeoning musical genre -- "Unnecessary Music". Examples of this genre include frat rock songs by bands with missing vowels in their names, the complete discography of Katie Melua, and Avril Lavigne's recent cover of "Scientist" by Coldplay.

Ironically, Avril might have benefitted from a dose of pitch correction, unless she intentionally patched her voice through a Cocker-Spaniel Effect and called it "her sound".

Sarah Palin blamed by the Secret Service over death threats

How do you feel about the Auto-Tune effect?