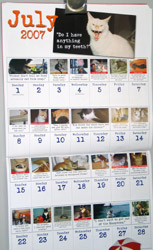 ♣ 2007 is already halfway over and barrelling towards its inexorable conclusion, even though July has always been the least frenetic of months for me. Having written a full year of daily posts since the previous site anniversary, I tend to get a little burnt out on updates when July rolls around, as can be seen by all the updates I did in July 2002

♣ As recently as three days ago, I'd actually planned on making July "Let's take Wednesdays off for the entire month and see how long it takes readers to catch on" month, but seeing Brianne and Philip reload the page every twenty minutes for updates on Wednesday morning guilted me into writing about English class. 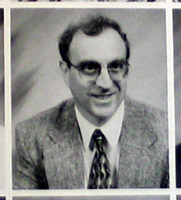 ♣ Unlike Anna, I never disliked Government class because I had a wonderful government teacher named Mr. Esformes. His sole teaching approach was to wear away at a familiar analogy, gradually getting more and more worked up as the class went on, until moments before the bell rang when he would dramatically rip away the exterior of the analogy to reveal how it tied into American Government. On the days that it worked, it was brilliant -- on the other days, his concepts didn't quite make the leap and students would get stuck trying to assimilate two vaguely-related concepts while he did nothing but point between the two on the chalkboard and plead, "Can't you see how these are related??"

♣ The feeling was not unlike playing a game of Pictionary where the drawer can't think of anything else to draw so they just frantically move their pencil back and forth between a picture that appears to be an inflated deer's bladder and another that might be a weapon of mass destruction until the timer runs out (at which point they frustratedly exclaim, "IT WAS PHILOSOPHY!"

♣ Speaking of deer, I saw a deer in my backyard last weekend, ambling lazily between the badminton net and the shed before disappearing into the common grounds. The common grounds behind my house are just barely a forest the way most adult movies stars are just barely 18 (plus or minus twenty years). This means that the deer had wandered down a forest corridor roughly six hundred yards long and thirty yards wide just to enjoy my lawn, so I guess I should be flattered. I always knew my house would get me a lot of doe. Maybe I can domesticate one and get myself a nice lawn fawn for decoration. 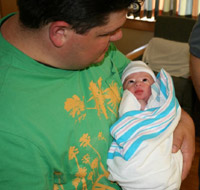 ♣ Speaking of fawns, which are the babies of that species, Diana and James had a baby last weekend. Benjamin Goldlust was twenty million inches long and weighed 6 pounds 5 ounces. We are very close to forming our own football team with all of these progenies (or, for the sports-impaired, our own raid party to down Kel'Thuzad). Congratulations!

♣ Someone tried to donate a "Behind the Scenes" World of Warcraft DVD to the bookstore where Rebecca works -- recognizing that it would not be worth donating to a prison or highly sought after by the Dupont Circle crowd, she wisely gave it to Ben (Anna's husband, not the up and coming raid leader who is now six days old).

♣ It seems like it's about time for a new storage format to come along and replace DVDs. Hopefully they will be smaller than CDs and DVDs but hold more information and have a fun acronym. I'm voting for "WeeVDVs" simply because it's fun to say. Plus you could exclaim "For your birthday, I got you Heebie Jeebies on WeeVDV" out loud and annoy the people around you ad nauseum. Try it out!

♣ Speaking of birthdays, today is my Uncle John's birthday and tomorrow is Kwan Burke's birthday. Happy Birthday! Have a great weekend, everyone!

Trying too hard to get out of jury duty

Wanted: Someone to test our condoms