Engineers are attempting to block the spread of invasive exotic fish by establishing an electrical barrier on the canal linking Lake Michigan to the Illinois River. Four species of Asian carp are spreading north up the river; a non-indigenous goby is attempting a move south down the canal.

It seems like every contemporary environmental fix-it program is just a weak band-aid for something we did earlier in history that failed. Engineers made the Chicago Sanitary and Ship Canal a century ago, and now everyone's surprised that fish are swimming through it. I'll admit that I am overly cynical though -- Operation Fishy Fence could end up becoming a smashing government-intervention success, the likes of which haven't been seen since the introduction of kudzu in the South

, Maryland's plan to destroy the amphibious snakefish by draining a pond 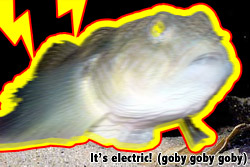 [The] Chicago project has yet to be tested by the Asian carp it was built to thwart. The Corps did test it with common carp [. . .] Only one has made it so far, probably riding the turbulence from a passing barge. [Corps project director] Shea said, "Depending on how brave or gutsy a fish may be, some may go a little further than others before turning back."

Some made their way past the site of the original barrier before it was built. [Alliance for the Great Lakes associate director] Brammeier said eggs and young from round gobies and other species can float downstream through the barrier. It may also take a higher voltage to stop smaller fish such as the round goby, since their smaller surface area makes them less vulnerable to electric shock.

In summary, the fence is useless if you are gutsy, very small, or have a boat to use as a distraction. The fence is like a box of condoms but with a lower success rate -- it may seem one hundred percent secure, but that one ballsy little swimmer that got through is going to cause a lot of trouble before this thing is all over. Even Brammeier agrees that the solution is not ideal.

"[We've] created a thriving economy but also a problem of fish being where they shouldn't be. We need to take steps to bring these things into balance. What that solution looks like is still up in the air."

When reporters asked Brammeier where fish should be if not in the water, and why his solution was up in the air where fish can just swim underneath it, he demurred.

The U.S. Fish and Wildlife Service monitors the advance of the Asian carp with an annual "carp corral," . . . [where] scores of bighead and silver carp rocketed into the air, stirred by vibrations from boats. "We've had lots of broken noses and damaged boats," said Pam Thiel.

You would punch a scientist in the nose too if he named you "bighead". Thankfully none of the injured men needed a sturgeon (although one man reported a lingering haddock that was not cured by aspirin).

People feel just a tingle, or nothing at all, if they stick their hands in, Corps engineers say. But the effects could be more serious if someone were to fall into the canal.

The Corps has also admitted that they cannot turn on a portion of the fence yet, because it causes sparks to jump between neighbouring barges which "could trigger an explosion or injure crew members". However, exploding humans is probably a reasonable trade-off for putting carp on the national no-swim list. The fence wasn't even needed for the longest time because Chicagoans are naturally dirty.

Until recent years, though, heavy pollution in the canal prevented fish from swimming through it. 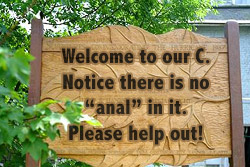 Something cheaper and more effective, then, would be to feed the citizens of Chicago more ruffage to increase the amount of poop in the waters, since it's already been proven that fish don't like swimming through a fecundity of feces. Embattled National Hurricane Center director, Bill Proenza, (who recently stirred controversy with his opinions on the QuickSCAT satellite system) offered to retask his satellites to monitor carp levels. However, taxpayers were not sold on the benefits of "CarpCRAP" despite Proenza's media blitz, which included public awareness signs along the canal and a three-day "Everybody Poops on Fish" fair in downtown Chicago. He finally abandoned his efforts after his website, www.craponacarp.com, was on the receiving end of a lawsuit from the owners of www.stuffonmycat.com.

To finish the job, however, the Corps needs an estimated $6.9 million beyond the original $9.1 million price tag.

Unfazed by the mounting costs, Border Patrol officials have already begun talks to erect a similar fence along the Arizona border.

Calls to Atreyu for comments went unanswered at press time.