It's been awhile since I had an honest-to-goodness themed week on the URI! Zone, like Video Game Music Week

from 2002, or the lesser-known failure, Integer Divisors of the Number "1" Week. Because everyone loves a miniseries (unless they are un-American), I've decided to create a week-long Memory Day feature about my attendance at the Governor's School for the Visual and Performing Arts, twelve years ago this month.

The Governor's School is a month-long program for public school students going into their senior year focused on a single discipline. In 1995, the School for the Visual and Performing Arts took place at the University of Richmond, sharing a campus with the Governor's School for the Humanities (a thesaurical way of saying "people good at the writing"). There were other, more boring, programs at other colleges -- for example, you could take a month-long sojourn into the amazing world of CHEMISTRY at William and Mary. My friend, Ada, went to this one and hated every minute. Because the full title takes so long to say, people in the know often called it "Gov School", though it was cringe-worthy to hear outside parties refer to it this way, much like "the Potterverse" or any references to The Net starring Sandra Bullock.

The rules of the program were straightforward -- no drugs or alcohol, get inside by curfew, wear your ID button at all times, no snogging, and remain vertical. Apparently the administration was worried about the possibility of teen pregnancies -- this is an understandable hangup since you never know what you'll get when you mate a violist and a trombone player1. With the exception of a girl from my high school, Laura Moody, who was kicked out on Day Two because all her permission slips were forged, rule infractions were few and far between. This is because we were all a bunch of artsy geeks, too busy following the muse to get into much trouble. 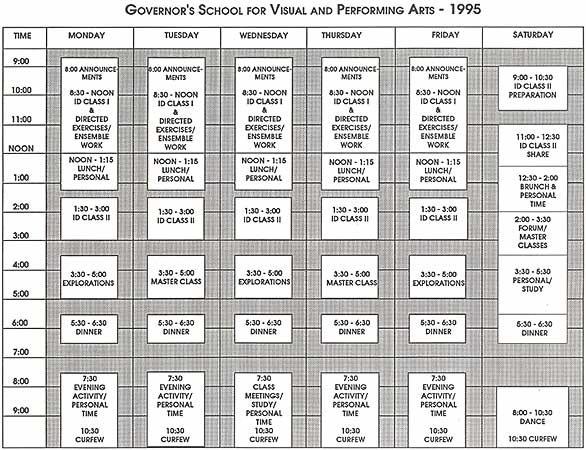 Even if we had all been malefactors, the schedule did not leave much time to prank it up. After a hearty dining hall breakfast, we had an hour and a half of music theory training followed by an equal portion of brass ensemble and quintet time. Following a lunch during which we had to fight for table space against campers from every hosted sports camp imaginable, we had an hour and a half class outside of our discipline (more on that tomorrow), and then another session called Explorations where we could sign up for oddball one-time courses like "Total Muscle Relaxation", "How to Choose a College", or "Poetry Reading".

Immediately after dinner was jazz practice -- an ad hoc attempt to create a big band under the dictatorial leadership of a big-dreamin' pianist -- and then a field trip into the artistic capital of the East Coast, Richmond, which lasted until curfew.

The only piece of the schedule I could really customize was the Explorations portion, and I immediately squandered it by signing up for Ultimate Frisbee on at five of the twelve sessions -- artsy students are not very sporty, so the fact that I was actually good at this sport turned me into the Michael Vick of the frisbee parking lot (they wouldn't let us play on an actual field because re-lining it was too expensive). The other sessions covered such hot topics as "How to make an Origami box", "How to look like you're fighting without actually making contact", and "Digital Sampling" (which was about a decade behind the technology and involved the Apple IIgs computer).

For the remaining sessions I signed up for "Study Hall", which was where you took your instrument and sheet music down to one of the practice rooms and then took an hour and a half nap, subsidized by the Taxpayers of Virginia.

1: Other than a baby that excels at accompanying the important melodies in nonstandard clefs.

Money falls from the skies

Runner up in a one-horse race