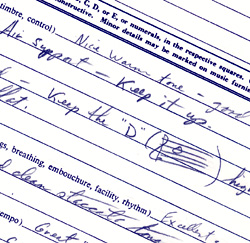 Before my senior year, I was a decent (if uninspired) trumpet player, easily making last chair or first alternate in All-District Bands. Although I was no Jason Price, I had a strong sense of rhythm and sightreading, and a secret weapon, my "beautiful tone". It didn't matter if I was playing a marching band tune or the solo in a Jim Swearingen song -- the only compliment I would ever get was "Wow, you have a beautiful tone!". I was the Tone Master -- if printers ran on tone instead of toner, I would have that call center job wrapped around my pinky finger.

During my senior year, I started experimenting with oddball mouthpieces like the 14B3A and the C3P0 because I figured it would be more fun to play high notes in jazz band and pep band than have a "beautiful tone" (it was). With this in mind, Governor's School was my last stop in "beautiful tone" land, during a time when I actually invested some effort into trumpeting.

Every day we would have brass ensemble for a rigorous 45 minute period, playing classic hits like the Weiner Philharmoniker Fanfare by Strauss. From there we would break up into brass quintets (there were exactly ten brass players in the right orientations) for another 45 minutes. It was here that I learned such quintet life lessons as "The Horn will probably struggle", "The Trombone player will try to take over as leader of the quintet", and "Despite common assumptions, the two trumpet players will not really care who plays 1st or 2nd because they'd rather be somewhere else". Our quintet wasn't half bad, and played several gigs on Variety Shows and Share days, which netted me several more "beautiful tone" compliments, but no hot dates. Another life lesson I learned is that you can't use the trumpet to pick up women unless you're John Schurman.

Another two or three hours per day was devoted to Master Classes (where you play for people so they can point out your level of suck), Jazz Band, and solo work. Practice rooms were merely empty dorm rooms in the basement of the building, so there were plenty of comfy chairs and beds to "think hard about trumpet" on when practicing got boring. There was no dedicated trumpet teacher, just a horn player, Alan Paterson, who worked with all the brass. Alan also co-taught our daily music theory classes.

Our first assignment in music theory was to write an 8-bar melody with strict rules like "no leaps greater than a fifth". At this point in my life, I was not a composer -- my idea of composing was to take a pre-existing score, enter it in Finale, and try to make it sound good on a Soundblaster sound card. This, combined with my dabbling in pep band arrangements, gave me a passable understanding of notation and transposition, but never really piqued my interest in writing original music.

For the thematic content of my melody, I turned to the description of a world in a fantasy book I was reading. I was heavily into Raymond E. Feist books at the time (this was a couple years before I finally realized that you can find better writing in a first year ESL class) so my first melody was inspired by a world (Kelewan) which was majestic and alien. I wrote the melody on a mini CASIO keyboard taken from home, with its high quality One-Note-Polyphony output in about twenty minutes after lunch (while eating an apple stolen from the dining hall, in the days before I was allergic to fruit). 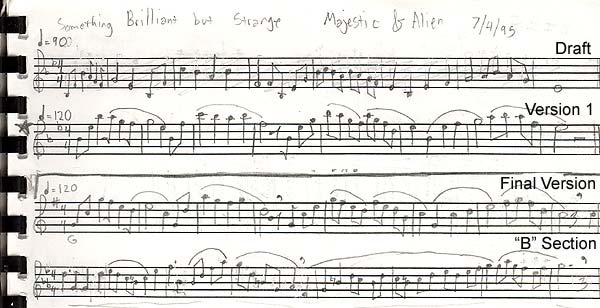 When I played it for the music theory class, it was immediately the target of jokes because the first three notes are the same as Aaron Copland's Fanfare for the Common Man -- which, in my opinion, isn't a half bad way to start a composing career. The next assignment was to write an 8-bar B section to the melody. My B section was well-received by all the students, and (like Congressional pork in a popular bill) made the mocked A section more enjoyable by association.

As the month went on, we had to add a single-line accompaniment to the original piece, and then an 8-bar reprise of the original melody "with slight differences". My slight difference was to end on a high C, because high notes are fun. By week three, I had the twenty-four bar MASTERPIECE you see below, and was really enjoying this whole composing thing. 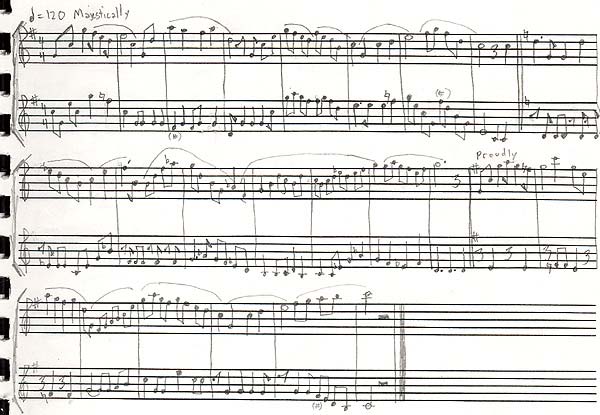 Forward momentum was achieved on the night of the third Dance, when resident composer, Marvin Curtis, (doubling here as a Dance Chaperone) approached me at the chess table and asked me to expand my composition for four instruments instead of two (he asked a couple other students as well). I was so excited to do this that I left the dance immediately (it was only 9:24 PM so I broke the rules), went to the grand piano in the auditorium, and had a five page monstrosity written in longhand by midnight. Every piece needs a title, so I picked Scintillation, pronounced by the brass ensemble with a dramatic half-whisper. 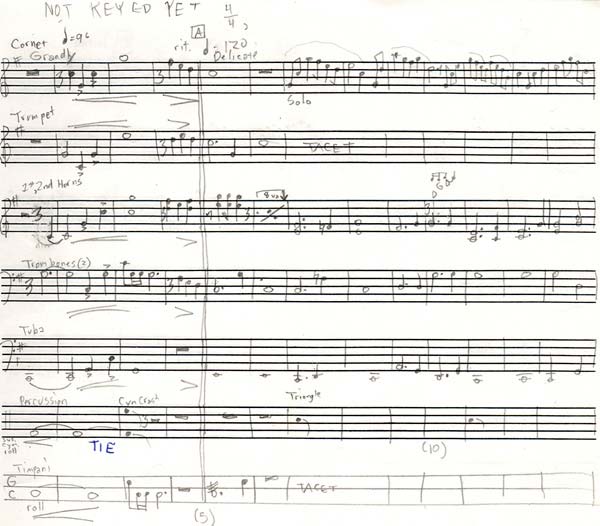 It was for full brass ensemble, not just four voices, and lasted a whopping 53 measures. As you can see from the sample above, I even invented a few percussion notation techniques, such as the timpani staff which seems to have several lines missing (in the "biz" this is also known as the West Virginian Staff for its resemblance to teeth). The brass ensemble was able to play it after a few hiccups (like the horns hating the high B in the beginning), and after performing it at a Share event for the rest of the school, Alan made the surprise announcement that it would be performed at the Closing Ceremony. The praise from my peers, even those that had no idea what a quarter note was, was enough to solidify my plans to be a composer -- an abrupt transformation that took less than twenty-two days to occur!

Love Songs By You