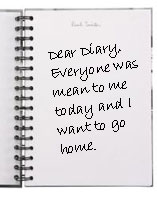 There are five major types of online writing that you might come across in your netly sojourns:

1) The Documentary
An itemized account of everything that happened in someone's day. Generally drops lots of names, irrelevant details about where they went and what they bought. Occasionally describes an honestly interesting event, but the general mundaneness of it all makes it more interesting for the people you already know rather than strangers.

Example:
Today was a pretty good day. I got out of work early and then went down to the Felafel Hut with Timmy and Tommy but they were out of corn so we had to drive out to Walmart to pick up our own tortilla mixings. Traffic sucked. After our midafternoon felafels, we went to Best Buy where they had plasma TVs on sale [link] but none of us could afford one so we all went home and had dinner with Tammy and Tummy. Survivor: Bronx was on at 8. Mahatma really needs to get voted off. I hear NBC originally wanted someone to mug the contestants and snuff their life instead of their flame, but that it was too risky for primetime TV.

2) The Emotional Barometer
An in-the-moment capture of how someone is truly feeling, the good, the bad, and the ugly, with no punches pulled. Might be depressing or might be uplifting, but is always very honest. Too much of this kind of writing by young adults may lead to teen-poetry, the sixth type of online writing which has been banned in most developing countries.

Example:
Okay seriously, what the f*ck is up with these retards driving at 25 mph in the left lane! They think it's their moral responsibility to make everyone go the speed limit, even when five million cars are clogging the road behind them, horns blaring. If they would remove their heads from places that they are anatomically incapable of putting them and, I don't know, GET IN THE RIGHT LANE, my commute home would be so much faster. I guess it's too much to ask when half the people on the road have an illegal license and don't speak any English and spent the last half of their life driving donkeys down dirt roads in Brazil the next time someone is holding up traffic I swear I'm gonna ram them from behind and push them off the road [Note run-on sentence]. *sigh* Maybe I'm just overstressed out from work and the fact that my girlfriend left me for a waiter at Denny's. No one serves three extra helpings of bacon without ulterior motives. F*ck life. Wait, I love my dog though. Goodnight.

3) The Lazy Linker
Generally a well-meaning writer who has lost interest in saying anything worthwhile and just posts links with one or two sentences of description. Much like visiting CNN.com except you only get one story a day.

4) The Daily Column
A thought-out, edited, and published glimpse at someone's insight on the news of the day, often with humour and embellishment for interest's sake. More interesting than a Documentary, but runs the risk off being very sterile and impersonal when compared to a Barometer.

Example:
It has often been said that cheese is found in many strange places. This was reinforced by the events that happened in Petropavlovsk yesterday [link]. The article mentioned that: "We never expected cheese to be found at the bottom of a mineshaft. Who woulda thunk that? I guess the Americans have finally gotten to us after all." To me this seems like a classic case of too much cheese and not enough cheese byproducts. Booty agreed with me and also mentioned that...

5) The Teenage Halfass
An initial attempt at creating a webpage which is subsequently forgotten but never removed.

Example:
July 3, 1998
Hay guyz! Welcome to my cOoL sItE! There's not much here right now but plz check back all the time. I will be adding pictures and talking about whuts goin on in my lyfe rite now! TTYL *gigglez* shout out to my boiz too

Generally, a blog will contain a healthy mix of Documentary and Barometer, with sporadic spurts of Lazy-Linker on those days when there's just nothing to say. Deteriorating blogs increase the percentage of Documentary and Lazy-Linker, eventually becoming totally Links, and then totally Halfass. This is the reason why I don't think my news updates are a true blog. My daily updates started out as pure Documentary when I moved to Florida, with the random Lazy-Linker tossed in, and is now mostly a Daily Column. I now think much more about what I plan on writing, and then refine it so it's hopefully worth reading. I have never written a Barometer update, and what you read here is definitely not as spontaneous as a real blog, but for me, this is fine.

I do like me a good blog though -- I envy the people who have the wherewithal to go balls out with their heart on their sleeves in front of friends, strangers, and stalkers. I don't think I could write a worthwhile blog myself, being way too private of a person to write about "the good stuff". I'm getting a little better, as you can see by my Things About Me page

(10 new things today!), but overall you'll have to content yourself with piecing the BU puzzle together based on the surface reflections I post every day.

What do you think?

U.S. military has no sense of humour

Given the size of the snake, if it would have bitten him instead of Alicia, he probably would not have survived.