Warning: Today's news update links to stories about animals with bad endings. This does not refer to pooping elephants. If you don't like sad animal stories, do not click on the links.

This is not the way you should be putting injured deer out of their misery, even if you are one of Arlington's finest

. Unless the deer is possessed by the spirit of Rasputin (in which case you should call a Scientologist for an audit), your best bet is to call up Animal Control.

. I think the most ridiculous aspect of the story is how it happened:

Kolinoski said the family had been celebrating in their yard [...] when his wife's uncle drove by and threw the explosive about 5:30 p.m.

"He wasn't even invited," the dog's owner said.

Who does that? "Heads up kids, your Uncle Billy's here!" 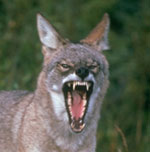 Sometimes animals get their revenge though. Here's a story paraphrased from America's Dumbest Criminals by Butler, Ray, and Gregory:

Kerry and David's idea of a good time was to get drunk and drive some thirty miles outside their southwestern city and wreak havoc on whatever innocent desert creatures happened across their path; mainly coyotes. From their new 4x4 Blazer, they would run them down or shoot them, sometimes setting traps for the unsuspecting creatures, ensuring themselves sufficient victims for a day of demented sport. One day, the pair removed a coyote from their trap and taped two sticks of dynamite to its body. Then they lit the fuses and turned the coyote loose.

Scared, confused, and panicked, the coyote ran for about ten feet, then turned and ran straight back at them. Kerry and David ran. The coyote followed. It would rush one way, zig and zag, then chase after the other guy. Finally, the coyote ran for the nearest cover, which was a five by eleven foot shaded area -- right under the new Blazer. The terrible two were now the ones scared, confused, and panicked. They couldn't chase him off. They couldn't drag him out. They couldn't even get near him. In fact, they had to run even faster now...

Kaboom! The two were thirty miles from home, and stranded in the middle of the desert. When they were finally rescued, they were charged with animal cruelty and other violations against nature. And once the truth was out, the insurance company refused to cover the Blazer.

Happiness is rediscovering an unopened box of chocolate eclairs in the freezer. Have a good weekend!