We saw Shrek 2 on opening night. Though not as cohesive a movie as the first, it was still very funny and hit all the right notes. The animation and graphics were improved, but for every bumpy bitmapped surface with warts, there was a scene where the models didn't quite gel as being in the same environment (such as a cat on Shrek's shoulder that looked like it was cut and pasted Southpark style).

One of the characters in the movie, the Fairy God Mother, had a business called FGM, Inc.

This summer, the theatres have been, or will be, graced with such works of art as Spider-Man 3, Pirates of the Caribbean 3, Harry Potter 5, Shrek 3, The Bourne Ultimatum, and (I'm not kidding about this one) "Live Free or Die Hard" starring a 52-year-old Bruce Willis. Just last week, Blizzard Entertainment announced that their new blockbuster game would be Starcraft II -- not Diablo 3 as some people expected (or Warcraft IV or World of Warcraft II for that matter).

There's something very comforting about a sequel: people are happy that they can return to a world or story that they loved without too much heavy thinking, and studios are assured that they can break even on their investment, even if the entire movie is a grainy cell phone movie starring a drunk hobo named Hal who happened to be sleeping behind the sound stage one night.

Although sequelitis has had an iron grasp on the movies and games industry for many years now (see also, the upcoming Police Academy 8), there seems to be a few other areas of life where sequels could find a welcome home. 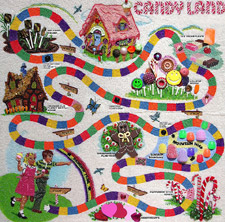 Board Games: In the sequel to Candyland, Gloppy the Molasses Monster is suicidal and threatening to leap from Gum Drop Mountain. The six coloured cards are now various Crayola shades of red and green (to emphasize to young children that the world cannot easily be split into absolutes): burnt sienna, raw umber, brink pink, fuzzy wuzzy brown, mahogany, and beaver.

Music: If the movie studios are allowed to release a third Weekend at Bernie's movie

, then I should be allowed to take one of my musical compositions, add a countermelody, and call it a sequel. Why struggle and slave for five seconds of new, usable material when you already have a proven score? Tchaikovsky's 1813 Overture, now with more cannons! 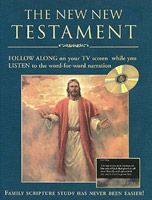 Religion: Have you read and reread the Bible to the point where you could tell Paul from John, or a Corinthian from a Doric with your eyes closed? Ever wondered what the lives of Oreb and Zeeb might have been like had they not been beheaded? Then try the New New Testament, now on CD so you can listen to it in your car (your choice of narrators: James Earl Jones, Patrick Stewart, or Kathy Griffin). "Noah's back, and now he's pissed!"

Politics: Actually, I think someone already beat me to this.

A bad case of summer movies 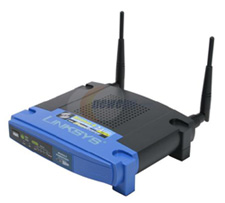 A wireless router and a set of wireless adaptors for the four computers in my house should be arriving sometime today, eliminating the need for a wired home network with Ethernet cables snaking everywhere like a giant squid with a very fast metabolism and not enough to eat. Converting my home into a wireless hotspot is the first step my plan to sell coffee and newspapers out of my basement, and soon I will rival both Starbucks and McDonald's in Wi-Fi popularity. I also plan on installing Internet access points in all of my bathrooms for added novelty -- my commercial slogan will be "Surf and Poop: It's Not Just For the Wave Pool Anymore".

As a kid, I only went to the Cameron Run Wave Pool one time, and it was an unmemorable experience. Fake waves really don't enhance the swimming experience, and with the ever-expanding number of obese children these days, every pool is a wave pool. But I digress.

There were three major reasons that I upgraded to wireless: 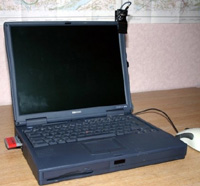 It's not like this is my first experience with wireless though -- my telephone handsets, my girlfriend, and my cats are all wireless, and have been for many years.

This post may contain spoilers from the previously aired season finale of LOST.

Thanks to LOST-Media for the screen captures.

I've been busy all week preparing for a briefing which I'll be giving before a myriad of initials inside the Beltway this morning, so I haven't had time to write today's Fragments column. Have a great weekend!

Lasers and iPods for the funeral of a lifetime

May 18, 2012: The first day when more Google searchers are interested in video game key bindings than how to cheat at various ear training programs. Cue the infamy. 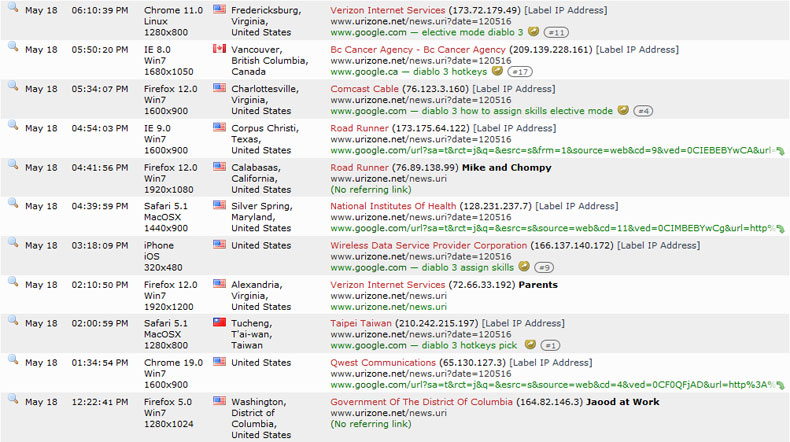 List Day: 10 Least Favourite Things with "Star" in the Name 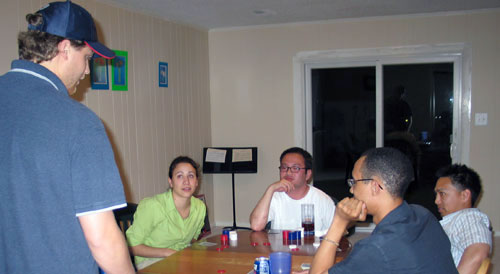 This picture was taken ten years ago in the early iterations of Poker Night. I had only lived in this house for about three months, so it was still poorly furnished. There was no pool table, and the only art on the basement walls were Anna's prints from Michael's.

Here is a very rare video of Evil Mike losing (yet again) to Vu while not recognizing the full house. Note the random construction materials stacked against the wall in the background, and the cheap plastic chips we're using.

The Shield, Season Three:
We waited too long to finish The Shield for free on Amazon Prime, but the good news is that you can now get the entire series on DVD for $25. The third season is a solid continuation of the Money Train storyline, other than the abrupt introduction of a new character that apparently came onto the scene during the gap between seasons, and then spends the whole season being annoying.

The Shield, Season Four:
The fourth season of The Shield continues to build organically upon the plot threads to date, and was entertaining throughout. Glenn Close had a great supporting role, but she was nowhere near as impressive as Forest Whitaker in Season Five.

Hit the Floor by Breakestra:
This album feels like a revival of classic 70s funk with a clean and consistent polish. It might feel a little too sterile to some, but it's right up my alley. You Don't Need to Dance is one of the catchier tunes on the album.

Rayman Legends: Original Game Soundtrack by Cristophe Heral:
The soundtrack from Rayman Origins remains one of my favourite game soundtracks, and I purchased this sequel soundtrack without ever having played the game it accompanies. In spite of a couple tracks that sound very derivative of John William's Harry Potter soundtrack, this is another successful mix. It features just the right balance of thematic reuse and organic development without falling into the Super Mario trap of sounding exactly like the previous iteration. This soundtrack makes me want to play the game, were it not for the fact that I'd also have to buy a Wii U and then wait ten minutes for it to boot up every time.

On Saturday morning, I dipped my toe back into the world of cloud certifications by passing the AWS Certified Cloud Practitioner exam with a 970/1000. This is the beginner cloud cert so it would have been embarassing had I not passed, but I wanted to start easy before renewing all of the actually hard ones.

In the afternoon, we had a barbeque of PTAs (Katie and Hannah) and neighbours (James and Patty, and Aaron and Vanessa) where I grilled my seasoned steaks recipe. It finally stopped raining midday, but was still too damp to do anything outside during the BBQ. Maia enjoyed playing with 3 other kids (2, 1, and newish) and the plastic kitchen we inherited from Kathy was a hit.

On Sunday, we tried hiking to Bear's Den on the Appalachian Trail. While we did make it, we faced flooded trails, overzealous poison ivy, and thick, pasty, humidity. Rebecca carried Maia in her crazy kid backpack while I gingerly traversed the mudslides to minimize getting dirty. 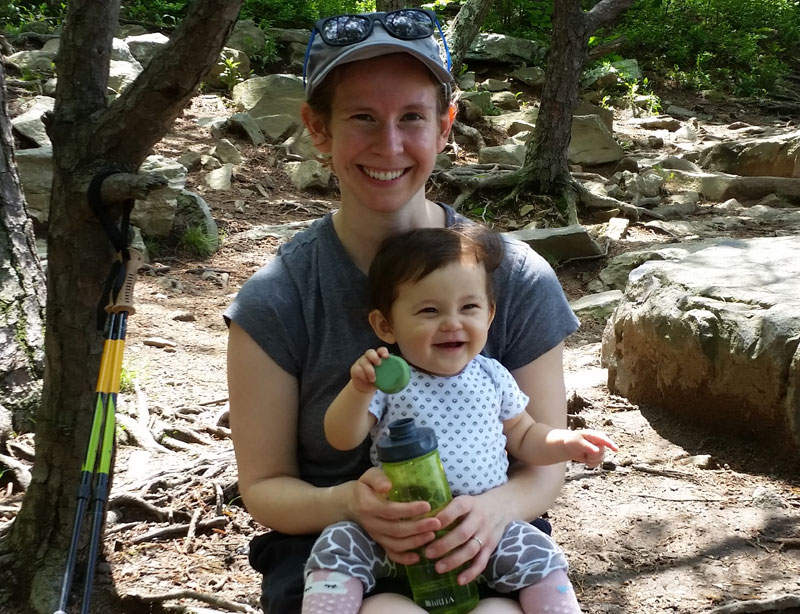 In the afternoon, we gorged on BBQ leftovers and stayed in the nice air-conditioned house watching Game of Thrones, the new John Mulaney special, and playing Forbidden Island.

Shadow and Bone, Season One (Netflix):
Based on young adult fantasy books by Leigh Bardugo, this series is mostly successful in setting up an interesting world that can be easily understood without exposition dumps. The two main characters, Alina and Mal, are easily the weakest links, lacking much in the way of personality, but the supporting "Crow" characters cover the deficit. I liked this less than His Dark Materials and more than The Witcher.

Blackfinn Ameripub - Ashburn:
This restaurant popped up on GrubHub in our ongoing search for ways to use all of the GrubHub gift cards Ian received for being born. It's more pricey (like Burton's) but has a varied menu with lots of food that sounds exciting (unlike Burton's). Rebecca and I were both satisfied with our order -- I never expected a delivered French Dip to taste as good as it did! We'll have to try eating here in person when restaurants are more normalized.

Infinite Things by Paloma Faith:
Paloma's music continues to get less interesting the more she moves away from here original 70s sound. This album is good if you ever want to sit in the basement and pretend you're in a bookstore.

Grim Dawn:
I originally reviewed Grim Dawn in 2019. It took the place of Overwatch as a baby-friendly game that I could pause and play in spurts of 10 - 20 minutes while feeling like I had made progress. I picked it back up last month to find that it had continued to receive regular content patches. Even though the core experience is exactly the same, there are several new zones to explore and random monster encounters that make uncovering the whole map fun again. The only downside -- there is so much content in the game now that you'll probably outlevel the 2nd Elite difficulty level. This results in a brain-dead slog to get to Ultimate, which is still very fun and challenging. Thank goodness for the Grim Internals add-on which let me zoom through Elite at 3x speed. More things in life should have speed controls.