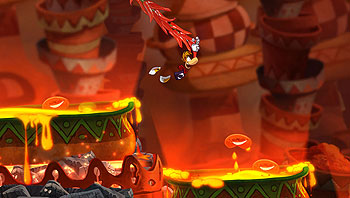 Rayman Origins is a 2D platformer released late last year on multiple gaming devices. It is probably the closest experience you'll ever have to starring in your own Looney Tunes cartoon. Take the "anything goes because of a stoned Japanese game developer" vibe found in Wario Ware: Smooth Moves, polish and refine it to Disney-esque (and kid-friendly) levels, and you'll have a template for this game.

The gameplay is standard fare: maneuver through cleverly-designed worlds, collecting coins (lums) and dodging or smacking enemies. Thankfully, there are no Wii motion controls required, which automatically bumps this up over any Mario game in my book. I can't count the number of times Mario has died because I had to scratch my nose.

The controls and available moves are responsive, and the difficulty of the game is very challenging yet fair. If you die, there's a 95% chance that it's your own fault. I was never frustrated while playing this game, and this was abetted by the fact that you immediately restart at the nearest checkpoint after a death. Say goodbye to managing lives, GAME OVER signs, or having to return to your world map or spaceship after each death -- the challenge of Rayman doesn't need these artificial slowdowns. (Rayman also has underwater worlds that aren't annoying, which is a first in video games).

Because it's so easy to try again, some levels do require a bit of trial-and-error to know exactly where to be and when. I actually enjoyed these sections because I was able to get "in the zone" in a way that hearkened back to playing Life Force in elementary school. It also helps that all of the hardest challenges are optional.

The art direction in this game is perfect. Levels and characters are inventive and smoothly animated -- it's almost a shame that some levels barrel you across the world like Sonic the Hedgehog, because the environment is worth a second glance. This game also has the most musically cohesive soundtrack since Diablo 2, perfectly capturing the mood of each level with a mix of jazzy arrangements or nonsense scat, with common themes and motives woven throughout. Here are two of my favorite tracks:

Overall, Rayman Origins is a solid game purchase. If you are Anna or Paige, it is also a great spectator sport to watch from the nearest comfortable couch. I'm still only about halfway through the game, but this is more because of lack of time than lack of interest.