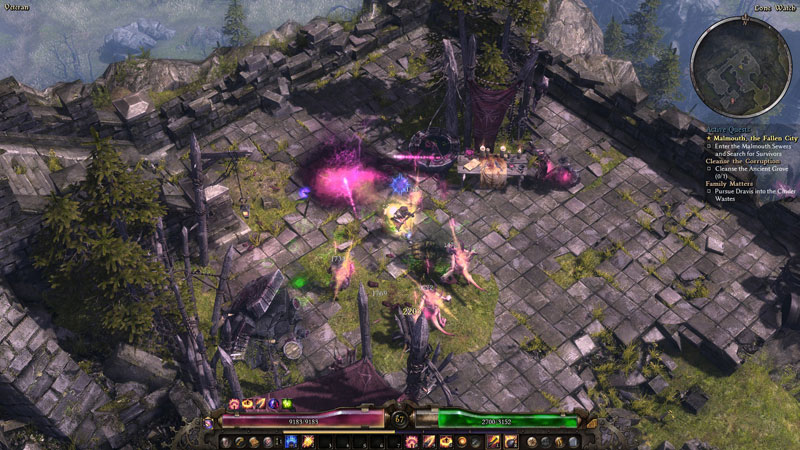 Built by some of the team that made 2006's Titan Quest (and with the same engine), Grim Dawn is one of the best Diablo II spiritual successors you've never heard of. It's not perfect, but it effectively scratches the action-RPG itch and I've already sunk almost 100 hours into it.

Grim Dawn is closer in style and pacing to Diablo II rather than Diablo III or Path of Exile. There's much less emphasis on movement skills and enemies feel more dangerous and harder to kill. Gear upgrades are less frequent but, as a result, feel more satisfying and well-earned.

The key discriminator of the game is its dual mastery system. Instead of selecting a single class with a skill tree (like a sorcerer or barbarian) upfront, you combine 2 classes to build a hybrid character. With 8 possible classes, this results in 28 possible archetypes. There's also a bonus point system (Devotions) that takes the worst UI traits of Skyrim's constellations and Path of Exile's skill tree and offers an obtuse layer of additional customization that you probably won't fully understand until your third or fourth character. I'm currently playing a Level 70 Purifier that plays like a WoW Retribution Paladin with bombs and a rifle, and having a great time.

The area where small studio budget limitations are clearest is clicking and pathing. Picking up loot by clicking on its graphic versus its name sometimes feels off. Your character will not always pick the best path to reach where you click, or make the best decision on whether to attack or move when you click beyond a monster. Thankfully, the usual hotkeys for "Force Move" and "Force Stand Still and Attack" are bindable. There is also a hotkey for "Move", which is a revelation for someone like me who has destroyed their right index finger by left-clicking to move across hundreds of hours of similar games.

If you try this game out and choose to stick with it, the Grim Internals mod is a must-have. Among its quality-of-life enhancements are: auto-pickup of the game's billion different crafting components, a health bar that floats over your character, and floating names for major monsters so they're easier to see on the screen.

Graphically, the game has a pretty grim colour palette (think of it as the anti-Torchlight) and the sprites and animation are nowhere near as polished as a big studio might be able to produce. Most of the monsters look like cheaper knock-offs of monsters from other games. However, the graphics effectively get the point across and are good enough to support the addictive kill-loot-sell cycle. The perspective is freely rotatable at any time and has a wide zoom range. The game map has a nice feature that uses color to show where you've been in a particular session, which is very helpful to confirm that you've cleared an area after the map has been fully explored.

The music is fine. There's one awful track that grates on the ears like an undergraduate composer version of Matt Uelmen that only knows one chord. It's so long and irritating to listen to that I teleport back to town to reset the music every time it comes on. Otherwise, there's a good mix of melodic tunes and the ambient nonsense that Trent Reznor unfortunately popularized with the Quake soundtrack.

At $25 for the base game, Grim Dawn is definitely a cost-effective purchase. I've enjoyed it enough to purchase the first of two expansion packs and would recommend it for anyone that needs a new action-RPG fix.