Not counting our "travel around the world and let it get stolen because it was cheaper than a trip to Costco" netbook, my Dell XPS M1530 was the only laptop I've ever owned. I purchased it back in 2008 when my primary needs were being able to play World of Warcraft and being able to work at the coffee table while watching a trashy TV show on DVD. The XPS fit those criteria perfectly with the downside of having a 90 minute battery life (because of the gaming graphics card) and a tendency to overheat and shut down. As long as I was content to be tethered to the power cord on a well-ventilated surface, I was fine with its 15" screen and 6.5 pound weight.

The XPS was also a tank, surviving two frame-bending drops (three feet to the coffee table, and five feet to a carpeted conference room floor). However, these drops led to instability after four years, not unlike an oft-tackled cornerback with slippery fingers. When it started to sporadically fail at turning on, I knew it was time to upgrade. 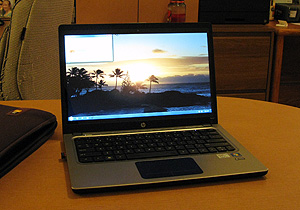 The "Ultrabook" merketing term describes a set of Windows-based laptops with a very specific range of features and a long battery life (and can also be translated as "a Mac Book Air for Windows"). I researched the available options heavily, and although a second generation of Ultrabooks is coming in May, I realized that I might be dead by then and impatiently chose the HP Folio 13. See the Details tab at NewEgg for complete specifications.

I wanted a laptop with a long battery life, good portability, and an HDMI output for showing streaming Amazon Prime content to the TV. I chose the Folio in spite of a name that reminds me of the pirate kid from Hook because of reports on how tactile and comfortable the keyboard was for a laptop. The solid-state hard drive is nice and speedy too, although you only end up with about 80 GB free after a Windows 7 install. This wasn't a problem for me: I installed all of my development tools and complete MP3 collection and still had 65 GB left. 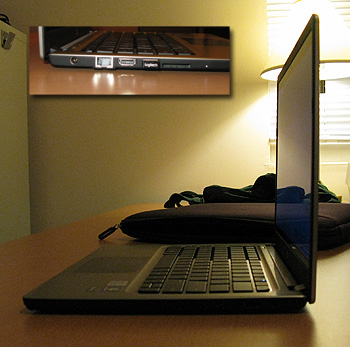 Look and Feel: The profile of this laptop is ridiculously thin, and looks functionally sleek. The base is smooth rubber, and the shape of the lid makes it easy to open. The fan position (bottom and back) doesn't seem like it circulates very well, but this rig doesn't get very hot at all. The fan is always running and is noticeable in a quiet room, but it has a consistent white noise sound without much modulation. I barely notice it unless I'm intentionally looking for it, and I am one of those people that hears every single sound at all times. Still, listen to it in a store if you think it might bug you.

Keyboard: The keyboard is very comfortable and easy to adapt to. I was never completely comfortable with the Dell keyboard, but I could write some code on this one without a problem. The toggled backlighting is very nice too, because you write better code in the dark. Every keyboard should have lit keys. I can't say anything about the touchpad since I always plug in a mini-mouse, but I like that you can tap it twice to turn it off. The function keys are inverted to default to computer commands (for example F4 is display brightness while Fn+F4 is the actual F4), but I don't feel like this affects my productivity.

Speed: The solid state hard drive makes this laptop start up ridiculously quickly from hibernation or a full restart. It seems no slower than my Dell and can easily handle the level of multitasking I usually do.

Portability: If you are blessed with superhuman strength as I am, you will actually have to work to keep yourself from accidentally flinging this laptop around the room. Weighing in at barely 3 pounds, it has amazing portability and easily handles my nomadic travels between conference rooms and auditoriums. (Booty weighs as much as 4 of these, according to the vet). It does not come with a case, but this Case Logic case works for me just fine.

Power: The battery lasts for hours while working and playing MP3s. The meter suggests six hours at normal operating, but I've never needed to go more than three hours so far. I preferred the Dell power brick more, because it was designed to have the cords neatly wrapped around it and secured. The Folio has a standard two-piece brick with a velcro tie on one of the cords which takes a little longer to pack away.

Sound: The speakers are surprisingly powerful for a laptop, and they're much louder than they need to be. You could probably play music at a living room party without any sort of sound system, although your guests might tire from the lack of bass.

Display: Although it's only a 13" screen, the 1366 x 768 resolution gives it a rich fineness. The viewing angle is fairly narrow, but if I were going to have many people sitting around the laptop watching something, I'd just project it (or send them home, because obviously the living room party has devolved into watching YouTube videos).

Software: I immediately uninstalled all sorts of crap from the base Windows 7 installation, most of it provided by HP without any sort of documentation as to what it did. This took about an hour. In my experience, HP seems to have the worst ratio of useful shovelware on its machines.

First Impression: I am very happy with the Folio 13 and have no regrets about purchasing it. With a laptop this light, who needs a tablet?

Update (8/26/2012): I regularly get web searches for people wondering if World of Warcraft can be played on the Folio. I have not tried it myself, but based upon my other experiences with the machine, it probably will not. The Folio is fine for older 2D games or video playback, but 3D graphics on the Folio tend to have framerates in the low teens or even lower.