In my review of Far Cry 3 a year and a half ago, I stated that the game earned a lot of good will from how fun it was to play, in spite of a host of flaws and annoyances. That game threw everything at you, amped up to 11, with the things that worked heavily outweighing the more forgettable features.

Far Cry 4 is essentially a reskinned version of the previous game, and is a prime example of taking excess to extremes. It may take place during a modern civil war in southeast Asia instead of a modern civil war on a Caribbean island, but the underlying framework of wandering around an open world shooting things and blowing other things up will be exactly as you remembered it, both the good and the bad. 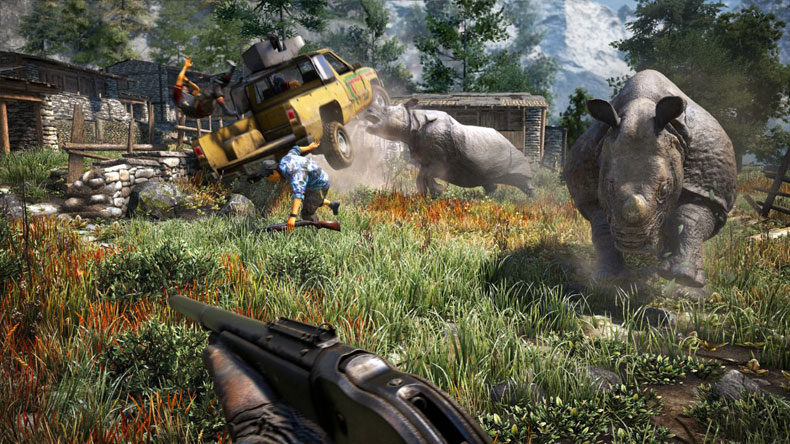 The biggest flaw is that there's simply too much to do, but not enough depth in any activity to result in meaningful gameplay. Within a gaming session, you might conquer an enemy fortress, craft upgrades for your loot bags, hunt snow leopards, protect villagers from honey badgers, learn skills that turn enemy takedowns into Quick Time Events, explore Tibetan caves, hang glide off mountain summits, disarm bombs, hijack supply convoys, craft syringes to boost combat skills, escort trucks through enemy fire, experiment with illegal drugs for the local stoners, find rare pelts for the village fashion designer, climb a radio tower, engage in timed races in various vehicles, or fight through a dream sequence involving a magical tiger in order to fly through the air and spin a prayer wheel.

Any perceived depth is a mirage, as you end up repeating these activities many, many times. It might be cool to see the emergent behavior of a lion stalking a herd of deer the first time, but the randomness loses its allure when an eagle soars out of the sky to attack you for the tenth time in an hour. Completionists (like myself) will hit a bout of gaming fatigue about 50% of the way through. The game would have been immensely better if they had pared down the scope of features, and refined a few of the best ones.

Oh, and a tip for your first playthrough: Don't buy the "Wingsuit" that lets you soar off a mountainside and deploy a parachute. You'll inadvertently deploy it while jumping down very small hills (don't all former WoW players jump to get everywhere?) and die from a 1 foot drop because the game expects you to deploy your parachute before touching the ground. My character died more often from fall damage than Princess Rosella in King's Quest IV.

Graphically, the series continues to excel, although I finally reached the point where I had to turn down my settings to keep the framerate responsive. The snowy mountain valley locale is well-realized, and driving around the countryside is great for a free vacation in your mind. The story is passably good enough to tie it all together, and the villain is fun and well-characterized (although the protagonist has the personality of a soup ladle). There are choices to be made during the course of the plot, but they didn't really have any major effect on the outcome. Unfortunately, the developers did nothing to correct the "unskippable ten minute cutscene" syndrome from the previous game.

UPlay, the social gaming service required to run this, is still unnecessary and stupid, and always will be.

The bottom line is that this is one of those games you wait to buy until it's under $20 in a Steam Sale. You'll get a solid, enjoyable 20 hours of entertainment out of it, and will not feel guilty in the least bit about never completing the last 30 - 40 hours of it.