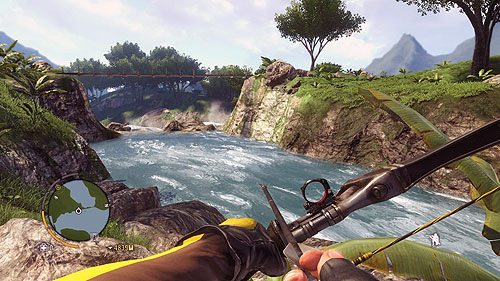 Having burned out on all of my web development and open source side projects over the summer, I decided to indulge in one final game to fill the pre-Labor Day doldrums of August. Even grown-ups deserve a summer vacation.

Far Cry 3 is a novel, if flawed, hybrid game that combines a first-person shooter with open world mechanics (meaning that you can run around ignoring the main storyline as much as you want, Skyrim-style). There are also very weak RPG elements, like a skill tree that you eventually get all of the skills from anyhow, and a tacked-on crafting system that adds nothing to game, other than annoying artificial limits on how much stuff you can carry before you hunt and skin a tiger.

Far Cry 3's strongest selling point is graphical. The tropical island setting is rendered beautifully and without framerate dips, even on my three-year-old graphics card. Simply wandering around the island exploring evoked the same feelings of awe that I felt playing Skyrim for the first time. Driving down twisty mountain roads reminded me of driving in Puerto Rico, and little touches like the island music playing on the radio station were pitch perfect.

Underneath the fancy paint job is a solid, fun core of an action game which spices up the exploration with both tactical and chaotic base takeovers, racing challenges, climbing puzzles, and a manageable variety of guns to play with. There's even a fully implemented Texas Hold'em minigame which is fun, but easy to bluff in. The in-game economy has far too much money available -- later in the game, I was regular taking small (King's Quest IV sized) leaps off of cliffs so I could use up some medicine and buy some more. I also purchased every single color of every gun I had, just because I got tired of the game's user interface telling me that my wallet was full (and because pink guns shoot fabulously).

Like all console-crossover games, the UI is more awful than it needs to be. You regularly spend more time exploring submenus than playing the game, because developers today forget that the PC has more than 6 buttons to press. The minimap is particularly annoying, as the HUD display is too zoomed in to be helpful for anything but enemy awareness, and the overland map is too zoomed out. I spent as much time switching between maps as I did exploring. Luckily, the UI problems are mere annoyances -- the actual game controls for jumping, shooting, and running around are tight and responsive. 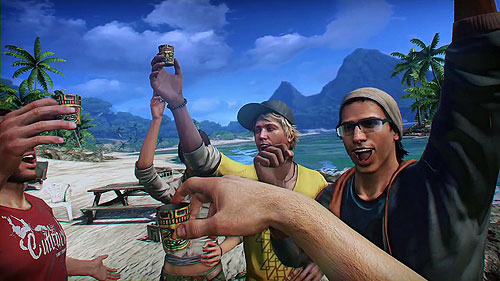 The plot is forgettable: a pastiche of cliches, unsympathetic protagonists, and more dream sequences than later seasons of the Sopranos. It serviceably ties the big set pieces of the action together, but its unforgivably unskippable cutscenes kill the momentum more effectively than commercial breaks on Whose Line Is It Anyways. No doubt the unskippable cutscenes (and the small wallet) were copied from the Zelda series.

This game is not for completionists -- although the "open world" mechanic means that you could spend years exploring the island and collecting useless relics and achievements, all of the non-plot action eventually gets stale. I started out combing every square inch for secrets, but mostly stuck to the main plotline after about 20% of the island was cleared. It's best if you use the side activities as a mere vacation between main plot cutscenes. You can also only go on one quest at a time, which seems like a needless console limitation (and the game annoyingly and repeatedly reminds you about the main quest if you haven't made progress in a while).

My last nitpick (which doesn't affect the actual game) is UPlay, the social gaming application that Ubisoft requires you to make yet another account for. So, I purchase the game on Steam, which then opens up UPlay, which then loads the game while telling me to buy future games through UPlay. I don't need or want a social client for my gaming and never play with random people on the Internet anyways. Leave me alone.

This review contains more negative feedback than the Yelp review of any given small business owner who has refused to pay their Yelp bribes in full, so it might surprise you to learn that I would definitely recommend this game. The novelty of combining so many game styles onto a graphically impressive island full of natives, ruins, and abandoned Japanese bunkers buys plenty of goodwill. It plays like Skyrim Lite meets Dishonored meets my honeymoon in Kauai, and I probably squeezed a good twenty hours of enjoyment out before I stopped dilly-dallying and beat the game.