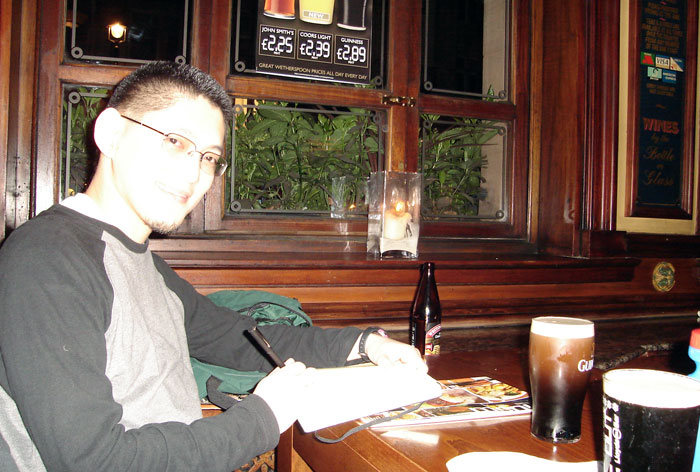 This horribly overexposed photo (unless I used to be white), was taken seven years ago today, on April 1, 2008. We had just arrived in London for our big European Vacation, and spent most of the evening walking everywhere around Trafalgar Square. By the time we were hungry, it was 9 PM and too late for most places to still be serving food (the polar opposite of what we discovered in Spain).

We ended up in the nonsensically-named "Lord Moon of the Mall" pub, where the food was bland and the Coors Light was just slightly cheaper than Guinness. I ate a cottage pie with my obligatory Guinness, and Rebecca had a sausage mash with a Festival Sampler Ale that was "nutty and good". The mash was too heavy for hippie Rebecca though, so we returned to the Jubilee Bed and Breakfast so she could sleep it off.

I remember all of this because of the notes in my official world traveler Moleskine notebook, seen on the table next to the malt vinegar. It's filled with shorthand, cryptic notes because I didn't want to spend more time writing than experiencing, and now I understand very little of it.