I received my early edition of the Echo, Amazon's voice-activated assistant, in the mail yesterday. I had signed up for an invitation several months ago, and purchased it on a whim in February for the following reasons: 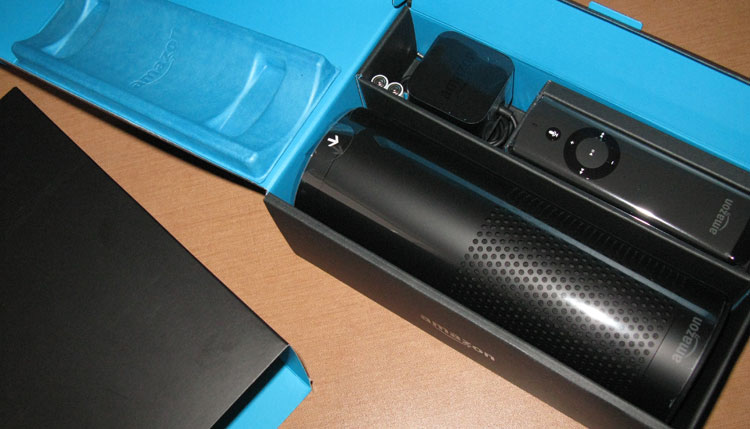 Setup of the Echo is painless, and even more streamlined than setting up a Fitbit. You must have WiFi available and Amazon assumes you'll have a smartphone for its (optional) Echo app, but thankfully there's a web-browser version for desktop dinosaurs like myself.

After 5 minutes of setup and voice training, the Echo sits there unassumingly waiting for a command. This is the point where you'll try all of the voice commands listed on the cheat sheet for lack of better ideas (like "Tell me a joke" or "Set a timer for 1 minute"). Voice recognition is impressive (less so when there's enough erratic ambient noise, like Rebecca clearing the dinner dishes) and works even ten feet away without any need to raise your voice. The integration of information lookup (like "How many ounces in a cup?" or "Wikipedia: Abraham Lincoln") is well-done although nothing that Siri hasn't done before.

Over the course of the night, the Echo batted about 0.7 for correctly understanding what we were saying and then responding in the correct context (you can see a history of your commands in the app and provide feedback about accuracy):

The Echo is much better at being a voice-activated music player, with direct access and control over your Pandora stations, Amazon Cloud stations, and free Amazon Prime Music. You can pick from your existing stations, create new ones, browse your music, or just ask the Echo to search for any artists or genres it knows about in Prime Music. I appreciated the sound quality from the Echo's hefty speaker, which wasn't as good as patching my laptop through an HDMI receiver, but was much better (and more convenient) than the over-treble associated with playing from a laptop alone. The Echo also has access to tons of radio stations and podcasts, and correctly streamed WAMU after I said "Play NPR". One downside to Pandora integration is that you can't skip the ads -- on my computers, I haven't heard an ad in years thanks to AdBlock.

It should also be noted that voice input is sent INTO THE CLOUD for command processing. Although you have to use a predefined wake word to activate the microphone (hopefully you don't have family members named Alexa or Amazon) and the device lights up when it's listening, there will always be a slight ick factor about knowing that your "bidness" is out in the world, and a potential for hacking or abuse down the road. This doesn't really bother me, as my fourteen years of daily blogging have already eliminated any possibility that I could run for public office without the added scandalous knowledge that Booty and I have long conversations about cat stuff. However, you should be aware of privacy concerns before you buy.

First Impression: A promising piece of tech, mostly for its musical potential. I'm still on the fence about whether it will remain impressive after the novelty has worn off.