Our first DUNGEONS AND DRAGONS experience last weekend spawned from Anna's offhand remark that she'd never played before, and thought it'd be fun to try once just to say that she'd tried it. Up until then, my exposure to D&D had been limited to the two Community episodes (one of which involved Breaking Bad's Jonathan Banks repeating "I punch him in the heart!") and the classic skit about the pungent scent of mildew emanating from the wet dungeon walls.

As much as I was obsessed with computer role-playing games in the 80s and 90s, to the point where I preordered Savage Empire on the day it was announced because "it combined dinosaurs and Ultima and, thus, had to be awesome", I had always stayed away from tabletop gaming. I was a Dungeon Master in spirit if not in name in fourth grade, when I used to draw mazes and let my friends fight through them during lunch, but intentionally stayed away from anything more formalized.

Before the Internet, people did not celebrate geekdom, and the perceived stigma around something like D&D put those kids on the social rung even lower than me, as the kid who was two years younger than everyone in his grade and played video games all day long. Even at boy scout camp, where I had the chance to try playing without anyone from school knowing, I declined because the Dungeon Master looked exactly like Screech from Saved By the Bell.

Thankfully, we have all aged to the point where it's okay to do "non-cool" things in the name of fun, even if there are still varying rungs to the ladder of geekdom (apparently, men that like My Little Pony, or "bronies", are still far down that ladder). With this in mind, I picked up the starter D&D materials with the hopes of figuring it all out and playing a game or two. I chose the most recent release, the 5th edition, because it supposedly had less emphasis on numbers and rules, and more on storytelling.

The first thing you should know if you want to learn D&D is that the available books are awful for teaching or engaging. There are pages and pages of rules, charts, and tables (over 200 pages in the Player Handbook alone) with but a few pages devoted to actually learning the game. If you don't have much background in similar ventures, you'll have to really want to learn to get through it -- the books reminded me very much of poorly-written technical manuals that show you exactly HOW to click on a button in a UI without ever telling you WHY you would want to click that button.

Luckily, my background in being a nerd, combined with that Design of Information class I slept through in undergrad, and the Music Pedagogy classes I took as a grad student (ignoring the Music part) allowed me to learn the system well enough to teach it. With the help of online blogs and other fan-made materials, I came up with a tailored set of instructions specific to the players (Anna, Ben, and Rebecca) that allowed us to skip ahead to the engaging, fun parts fairly rapidly. 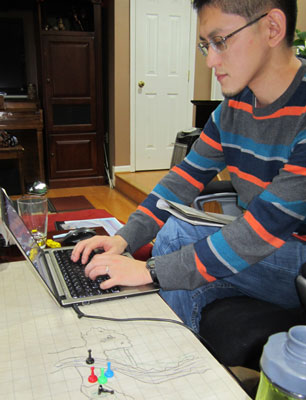 Although games can be played with just the stuff in the Starter Set, I augmented with extra sets of dice, a vinyl mat with graphing squares for drawing maps, generic tokens representing the players and monsters, and various game soundtracks on YouTube. Although imagination is the number one requirement for a successful game, the visual and aural stimuli didn't hurt as a gentle introduction for neophytes. I also used Zim Wiki on my laptop to set up a searchable archive of statistics and lore so I could spend less time flipping pages to look stuff up and more time weaving the story.

It took a couple weeks of preparation on my part, but resulted in a first adventure that went as well as could be expected. I avoided a slow, boring starting session by doing character creation in advance (shielding the players from the boring calculations) and streamlining the rules down to a 20 minute tutorial covering the most common scenarios. The party of Bjornson, Rynn, and Nit survived a goblin ambush, convinced a shopkeeper to pay for a wagon full of supplies that didn't belong to them, and kicked a goblin in the crotch during an interrogation and rescue operation. Enough fun was had that we will play again soon!

Have you played? Do you want to play? Share your stories in the comments section!