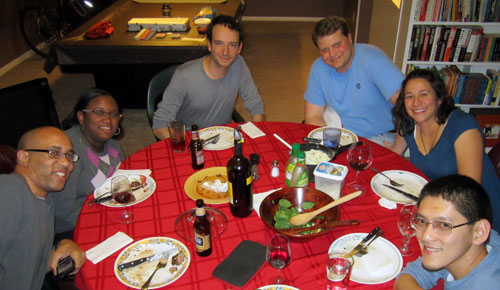 Mike (of Mike and Ghost Chompy) flew into town this weekend, looking not a day older than his last visit in November 2012. On Thursday night, we had dinner at Jackson's, overloaded to be both a welcome-Mike and a happy-birthday-Annie occasion. After that, I taught him to play Hearthstone, which he proceeded to play for the next 24 contiguous hours, pausing only briefly on Friday morning for brunch at Eggspectation.

On Friday afternoon, Evil Mike stopped by to continue the fake LAN Hearthstone party, and we were later joined by Rebecca, fresh out of work and yoga, Taje, driving separately from Evil Mike to reduce her exposure to Hearthstone, and the Ahlbins, kids left with grandma and ready to party. We devoured a dinner of steak (3.75 pounds for 7 people) and potatoes, and then played our first game of poker since 2011, while trying to convince the Ahlbins to name their next child and first son, White Fang. 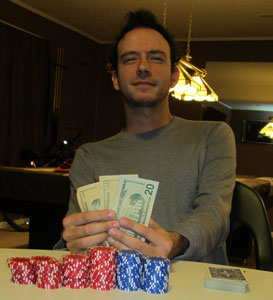 Mike ultimately won in poker, taking home the top prize of $40. I came in second, winning $20, and Evil Mike took 3rd, breaking even on his entrance fee. We also tried a game of Taboo which petered out after the clue for "snob" was "door", as in "doorsnob".

On Saturday, we went on a winery tour for Annie's birthday, starting at Quattro Goomba, and ending at Pearmund Cellars. The first had a few good, yet pricey wines, while the last had too many sweet whites and not enough peppery reds. From the winery, I returned home to introvert while Rebecca and Mike joined the party bus back to Ballston for more socialization. Rebecca also took her first trip on the Silver Line to get home, finding the ride to be on time and fast, with a slightly confusing Kiss and Ride location at Wiehle.

Sunday was a lazy day, during which we finished the third season of Person of Interest, did some laundry, and grilled some glazed salmon for dinner.