The area around Lake Crescent was a bit more rainy than Seattle, probably by virtue of it being a temperate rain forest. Luckily, the bulk of the rain usually occurred in the morning or overnight, minimizing the impact on our outdoor times.

We woke up early on Wednesday and did a short 1/2 mile hike to Marymere falls, across bridges and up switchbacks staged for maximum spectacularity when we finally reached the overlook. We then returned to the Lodge for a hearty breakfast of breakfast meats for me and oatmeal for Rebecca. The ending of the rain storm was timed perfectly with our meal, so we hurried from breakfast to our first big hike, Mount Storm King.

After an ominous sign warning about angry wasps at the foot, we branched off the flat family trail into the hills. Mount Storm King was only 2.2 miles one-way, but its peak was at 4,500 ft -- this meant that we were continuously going up on the way, and continuously destroying our calf muscles on the way down. 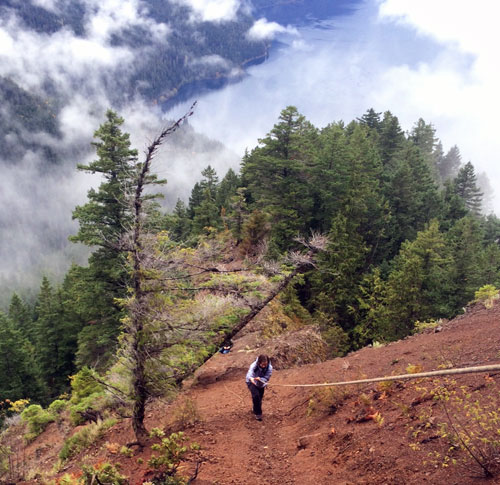 We arrived at a peak with a spectacular view, and saw that someone had left a sketchy rope out to go further up the mountain. We had decided to deem our location the end of the hike, until another young couple from Florida appeared on our back trail. They had been told by a Lodge employee that the ropes were an official part of the trail and were hell-bent on reaching the true top.

After some cajoling, we went up the rest of the way with them, relieved to find that the first sketchy rope was actually securely knotted, providing reliable support on an otherwise narrow, crumbly precipice. The picture on the right does a much better job showing the narrowness and scale of the location than the one I posted two weeks ago. Three more rope lines later (none of which were as daunting as the first) took us to the tippy-top of the mountain, where we startled more deer who took off sprinting down a 50 degree slope.

The way down sucked.

In the afternoon, the weather was still mostly sunny, so we took the hour long trip up into Olympic National Park to see the views at Hurricane Ridge. Unfortunately, it had reached 37 degrees with whipping rains and snow by the time we got to the top. We were the only ones there, besides a shifty fellow parked next to us by himself. We did a quick sprint to the overlook but couldn't see anything, least of all the wild attack goats from all of the warning signs.

After a drive home and a scalding shower, we finished the night off with another dinner in the Lodge.

On Thursday, we left Lake Crescent and took a road trip to our next lodging. We visited Salmon Cascades, which was definitely oversold -- the signs essentially said "you'd see salmon jumping here if people hadn't caught them all while fishing", so they should probably just rename it "Cascades". We then drove through the town of Forks (and saw no Twilight-themed attractions) to the Pacific coast. 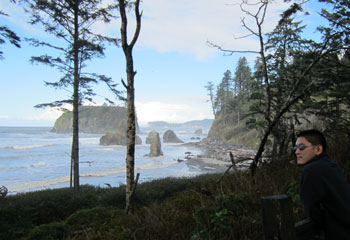 Once again, the sporadic rain stopped as we got ready for outdoor time. The most impressive thing about the beaches of Washington was the colour palette -- after days of millions of shades of green and brown, the blue tint reflected off the water was a refreshing change. Many of our pictures actually look like oil paintings, or the background of a Smithsonian diorama on the Pacific Ocean.

We hit three separate beaches on the coast: Ruby Beach, Beach #4 (name probably inspired by Mambo No. 4), and Kalaloch Beach. We walked several miles along the last one, and even spotted a bald eagle nesting on the cliffs.

In the late afternoon, we finally made it to Lake Quinault Lodge, which was much more commercial than Lake Crescent, with more options and nicer rooms. With the rain held at bay, we walked along the lake at sunset and took some great pictures.