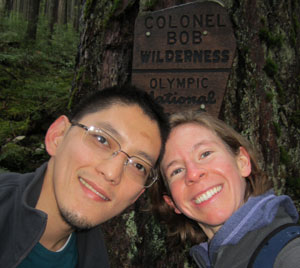 Our last full day in Washington had us exploring the environs of Lake Quinault. We started at Fletcher's Canyon, where we pulled into an eerie, secluded parking area reminiscent of all of the hiking dead ends on Kauai. The trail here was unmaintained, but passable enough for avid hikers, according to the sign-in sheet at the entrance. One group from Miami wrote that they didn't hike very far because they were worried about their car getting stolen, but nothing like that happened to us.

This trail had a more pleasant mix of ups and downs that Mount Storm King, although areas near the beginning had turned into rushing streams from recent rains -- we spent the first half hour hopping from rock to rock trying not to get our feet wet. When the excitement finally calmed the eff down, we reached a pleasant woodsy trail full of weird mushrooms and mossy rocks.

The trail was well-marked, but we ultimately got to a point were we couldn't reach the "final" waterfall without wading or burrowing through a coyote den in the giant mossed-over root systems of the trees. We got close enough for government work and then headed back out. 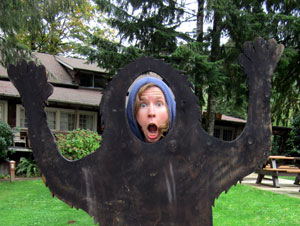 From there, we drove around Lake Quinault in search of Roosevelt Elk, testing the suspension of our rental car in a completed Minesweeper map of potholes. We never did see any elk, so we decided to drive to Higley Peak next.

We didn't find Higley Peak either -- the guides said to drive straight up a country road until we saw the turn-off, but the road entered Quinault Indian territory and a seedy-looking logging area with multiple intersections. Rather than get lost on a reservation, we came back to the Lodge instead.

In the evening, we built up an appetite on the Quinault Loop trail, full of waterfalls and a cedar bog that looked just like any other bog, and then had a big dinner in the Lodge Restaurant (fish and chips for me, a burger for Rebecca).

Saturday was our returning home day. We woke up early and drove through several decaying small towns, and got back to the airport around 10 AM. Since our flight didn't leave until 1, we spent a good deal of time browsing SEA-TAC airport shops and freeing ourselves of duty. We then waited in line with all of the indignant ladies who yelled at the airport workers because their carry-ons were bigger than me, and had an uneventful trip back to Dulles.

At home, we fed Booty, immediately unpacked, and did what we could to get back on Eastern time.