The URI! Zone turns 18 today (IT'S LEGAL!), and this is the 3266th blog post I've written since I switched from the "homepage" format to the "blog" format thirteen years ago. For the teenagers in the audience who are obnoxiously reading this on their smartphones in a movie theatre, a "homepage" was a self-published website where you posted your resume and your collection of animated "Under Construction" GIFs. The best websites relied on a broad swath of "HyperText Markup Language", but mostly the FRAME and TABLE tags. 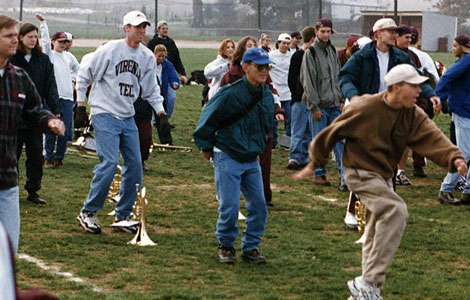 Turning 18 can be an awkward and unprecedented evolution, even for an amazing website like this one. I, myself, became of voting age in the crisp Fall of 1997, and the photo on right shows what I looked like back then (with a Paige Poythress cameo in the upper left).

Although to laymen it might seem as if I'm about to take my pants off, I'm actually kicking off a complex dance routine known as "The Burro" during marching band practice. My hands are not on the burro's reins because it was cold outside and they're in my pockets. This dance party was, obviously, for MEMBERS ONLY.

My readership has remained pretty steady over the years -- there have been over 150,000 unique visits and 7359 reader comments since I left grad school in 2003. Those ridiculous numbers exist in spite of the fact that the vast majority of my content consists of throwaway posts like This Game of Scrabble I Played Last Night and List Day: Letters that Start with the Letter A. Seriously, look at the number of months in the OLD POSTS menu on the left -- not all of that could have been Pulitzer-worthy prose.

The only lesson I can learn from this situation is that quantity trumps quality on the Internet. If you force yourself to write creatively every day, you'll keep people coming back, and might even craft a couple gems amidst the dross (see also, LOST). In other words, posting (like pooping) must be regular to ensure a blog's long-term health. And (unlike pooping), what you get out of it doesn't necessarily match up with what you put into it. 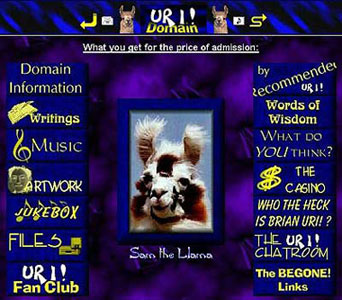 I don't anticipate making many website changes over the coming year, as the current design is the result of millions of dollars worth of painstaking UX research across every known shade of blue. I'll just continue meeting minimal expectations by posting daily on the inexorable journey towards the 20 year milestone. Not many websites can boast such longevity. If Yahoo! implodes in the coming year, the URI! Zone will have officially outlasted one Internet giant, and will set its sights on the next one in line (AOL.com, of course).

Though I could plan a big blog bash in August 2016 (with strippers and ocean sounds), I'll probably just celebrate 20 years by posting a bunch of time comparison trivia in the format of "The time between Y and Z is now greater than the time between X and Y. OMG!", or maybe give out some free Amazon gift certificates to anyone that's still alive. I hesitate to give out more gift certificates though, because the URI! Zone has awarded exactly $222 through contests so far (proof), and that's a pretty sweet number to stop on forever!

If there is anything you would like me to devote some blog time to this year, you can always leave a comment or send me an email. Thank you for your continued readership and friendship!