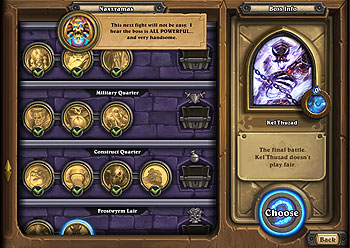 Curse of Naxxramas is a single-player campaign for Hearthstone which allows you to battle against bosses from Warcraft lore (similar to the original tutorials) in exchange for new cards to add to your decks. The campaign came out in five "wings" over the last month, with each wing consisting of a few bosses and hero challenges.

The entire campaign could be bought for $20 or a comparable amount of in-game gold, or for a slightly more expensive price on a wing-by-wing basis. I used real money because, like a kid living next to a 7-11, all of my in-game gold gets used to buy new cards as soon as I have enough of it.

The main campaign is a pleasant diversion of puzzle-y action -- each boss has a particular gimmick hero power, but it never took me more than one or two tries to beat each one, and I never had to build a special deck to do so. After beating the campaign, each of the 9 heroes gets a special class challenge (where you must beat one of the bosses with a pre-crafted deck that's usually awful). Again, these challenges weren't particularly challenging at all -- the only one that could be considered unfair is the Warrior challenge, which relies heavily on getting just the right random cards throughout. This challenge took me about 8 tries to get through. 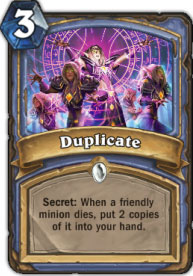 The final part of the campaign is "Heroic" mode, where you replay the bosses with obviously unfair restrictions put on the matches. I gave up on these pretty quickly, since they involve a lot of deck building and fine-tuning, which means waiting ten minutes between each game to get through all of the animated loading screens to the deck page. The only rewards for this mode are golden versions of existing cards.

At the end of the day, the real reason to care about this campaign is the introduction of new cards -- you might play against people with the new cards even if you haven't purchased the campaign. Since the lore behind this campaign deals with the Undead, most of the new cards have Deathrattle effects. All of the cards are interesting, but only two or three have found their way into my main playing decks. The rest are situationally fun, or require a brand new deck with the right synergies to exploit.

Overall, the content is polished and pleasant, but not quite worth the dollar value. I bought the entire set up-front and as new wings released each week, I found that it sometimes took less than 30 minutes to get through everything but the Heroic games. If you have a surplus of gold saved up or just want to support the development team, there's no reason you shouldn't get this.