Friday marked the arrival of Rebecca's "new" laptop, an HP 15-g080nr, so I spent the afternoon uninstalling reams of HP shovelware (we really wanted a program to make custom labels for our burned CDs so thanks, 1994!) and prepping it for use. The word, "new", is in parentheses because this laptop actually came out a while back, but is one of the few remaining laptops on the market that comes bundled with Windows 7 -- according to operating system canon, Windows 7 is the last OS that Microsoft ever created. 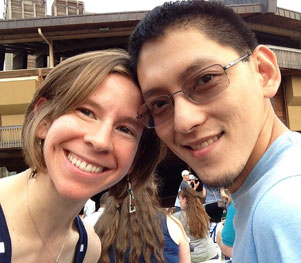 On Saturday afternoon, we took a trip to Wolf Trap (which is inexplicably missing a stop on the Silver Line) to watch Jim Gaffigan with Marv and Annie. We arrived a half hour before the lawn opened and got a nice spot for picnicking, and then observed the social experiment where people arrived minutes before the show, huffed about the entire lawn being taken up, and tried to fit themselves into ever-shrinking patches of grass between blankets, to the irritation of everyone that got there early.

The opener, Ted Alexandro, was a success, funny in the same almost-family-friendly way as the headliner. Jim Gaffigan hooked the audience immediately with some local jokes about Dulles Airport and the distance from McLean to DC. Overall, his set was very funny and mostly about steak, although I was disappointed that he closed with an abbreviated version of his "Hot Pockets" routine. It felt obligatory -- there was nothing new for people who'd heard it before, and it was too rushed for new listeners to appreciate. After the show, it only took an hour to clear the parking lots, which did not trigger any Jiffy Lube Live PTSD.

On Sunday, I played Divinity: Original Sin for as much of the day as possible, finished True Detective, and started the fifth season of Community.