When it comes to riding in the car, children are always given short shrift. They have no control over the radio, must fight their siblings to avoid the "hump", and have to sit in rear-facing child seats for longer and longer. The latest study from the American Academy of Pediatrics recommends that children should sit in the rear-facing child seats beyond the age of 2, and platoons of helicopter moms have even been spotted at the Vienna Metro station, forcing their adolescents to employ the rear-facing Metro seats "just in case".

As many parents can attest, kids hate the rear-facing child seat with a passion. In interviews with a noted baby whisperer, a representative sample of 21st century one-year-olds noted that facing the rear was "boring as hell" because you "can't see a damned thing". Installing a special mirror to set up some sort of mommy's-face periscope was also dismissed as "a stupid way to sell unnecessary baby products". (Special thanks to the parents of Dakota, Leighton, Teegan, Creighton, London, and Skyler for allowing their children to be interviewed for this article).

Unfortunately for these kids, safety in the car will always be the primary directive, and rear-facing child seats have consistently protected children from collisions, turn-overs, and errant nudity near strip clubs. However, there is definitely room for improvement, and that's where my new invention comes into the picture. 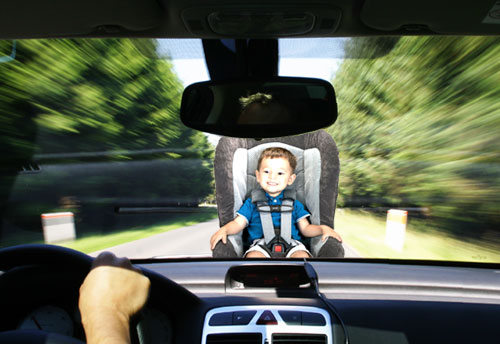 Introducing the URI! Hood-Baby, or "Hoody" for short. This child seat attaches securely to the hood of your car, so your baby can look at you in the driver's seat for the duration of the trip. It retains all of the safety benefits of a rear-facing car seat, while allowing your child to see more than the stained beige interior of your Volvo.

Direct sunlight provides increased vitamin D intake and an early warning system should your child be bitten by a vampire. In a clinical study, the increased exposure to smog and dirt boosted the immune systems of 84% of test babies, an improvement beaten only by the home remedy of rolling your baby in a gluten-peanut paste twice daily for a year.

The hoody comes with a plastic accessory that can be attached to your child to prevent bugs from splattering on your windshield, and is also Bluetooth-enabled so Junior can meet other babies while idling in downtown traffic. The frame is hooked directly into the car battery while the engine is on, to prevent baby thefts when you're at a stoplight.

When reviewed by Consumer Reports, the URI! Hood-Baby was branded a BEAST BUY!, because "BEST just wasn't good enough". Coming to select Walmart and Target stores in Fall 2012. Preorder now for $89.99!