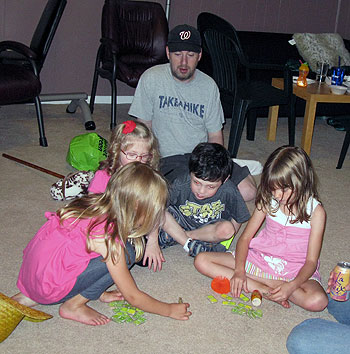 On Friday night we stayed in, and I introduced Rebecca to the pop culture references of Zoolander, only about thirteen years too late to be useful. The movie has aged pretty well, although it's the overabundance of celebrity cameos that really keeps it fresh.

Following a Costco run in the morning, we took a pleasant stroll through Claude Moore Park, so Rebecca could measure the distance for future runs (3.04 miles on the outer hiking loop). This time around, we saw zero deer, but many humans at assorted family reunions, softball tournaments, and swim meets.

In the evening, we had another barbeque where the kids played three-way Connect Four while the parents shared secrets about the best brands of sippy cups. We ate grilled blackened chicken breasts, hamburgers, hot dogs, and Cheesy Garlic Bread potato chips -- the latest special flavour from Lays which was much better than the "Chicken and Waffles" flavour from last year.

Sunday was a blur of laundry, badminton, and Hearthstone, and I also started playing a Kickstarter-funded RPG, Divinity: Original Sin, which greatly reminds me of Ultima VII. In the afternoon, we went to see Wish I Was Here, Zach Braff's spiritual sequel to Garden State. Unfortunately, it wasn't showing at the Alamo (probably because it had too many indie songs), but we had a near private showing at the local crappy movie theater, followed by dinner at Los Toltecos. We closed the night out with True Detective, whose pilot episode we enjoyed.