There are no major spoilers in this review. However, if you have no interest in video games, you will hate this post, and should probably skip it. 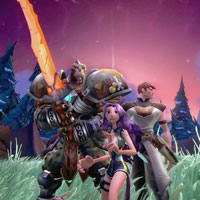 Other than WoW and 18 levels of Everquest in 1999 (as a wisp-kiting bard named Squiggy), my only MMO experience has been Guild Wars 2, which lasted approximately 13 hours, and still ranks among my least cost-effective retail game purchases. All of these ancient history details guide my first impressions of Wildstar (made by some of the original WoW guys), which I recently purchased on impulse after too much Diablo 3, and which I've spent about 15 hours playing so far. I'm currently a Level 16 Exile Medic named Plinky on the PvE server, Orias.

It's pricey: $60 for the game and a first month, followed by $15 per month afterwards. However, it's good enough that I've played it more than some Steam Sale games I've bought in the past.

My first impressions were a mixed bag -- I don't know how a starting area can simultaneously be both too chaotic and too on-rails, but Wildstar nails this dichotomy. Too much complexity is available too soon, and the environments are too vibrant and loud, with distractions everywhere (not unlike the first 10 minutes of Moulin Rouge), but it calms down quickly after level 5. I like to browse the Options menus of games when I first start out, but the level of customization available (with minimal explanation in the tooltips) is very off-putting. My advice here would be to just get through the starting missions first, and then figure out how you want to customize your play experience.

Questing is comparable to WoW, with a few streamlined features like turning in a quest from the field. I encountered nothing innovative, but what is there is polished and well-done.

NCSoft has the uphill battle of staging an MMO in a world without pre-existing lore, but the backstory is available in optional dialogue choices and books, if you want to indulge. However, I usually start out reading these religiously for about 10 minutes before getting bored and just clicking through them at Carpal-Tunnel-inducing speeds to get to the next objective. Generally, lore is wasted on me.

The big difference added to Wildstar is the use of "telegraphs", which shows geometric shapes on the battleground where an enemy is about to attack. Gone is the auto-targeting and guaranteed casting of a spell from WoW -- now you need to cast your spell while running and keep your telegraph on the enemy, while dodging other telegraphs. This definitely makes combat more engaging, but also makes it harder to manage your movement and hotkeys at the same time. During my first battleground, there were so many overlapping telegraphs on the ground that I felt like I was freebasing a ninth grade Geometry class taught by a My Little Pony, but I'm slowly getting the hang of it. 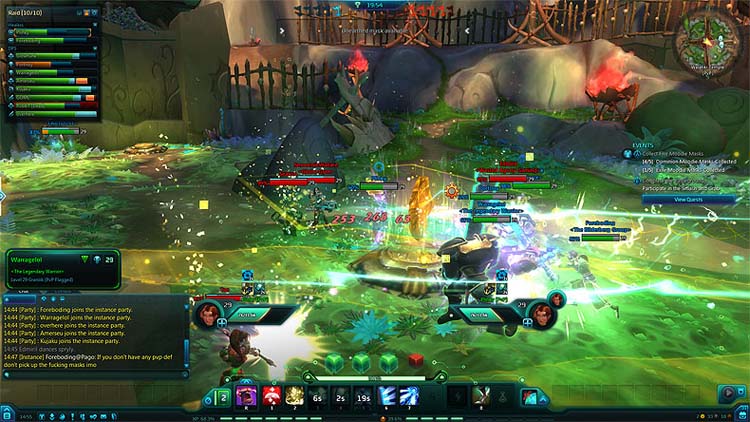 The UI is also a mixed bag. There are millions of options to customize the look and feel, but the options that you end up needing are often missing. Also, tooltips and tutorials are splattered all over everything, except on important concepts that you'd really like to know about. Leveling up and the associated ability / AMP system could use a lot more tooltips and tutorials, but I was able to find enough information on the official forum and Reddit.

One of the things I hated about WoW was the constant need to fix broken Add-ons when new patches were released. So, I'm trying hard to NOT rely on add-ons in this game. I have only downloaded one, BijiPlates, which is a nameplate add-on that removes a lot of the artistic complexity and shading from health and cast bars. This was a necessity from a healer's perspective, because it was impossible to figure out who to heal with the default UI.

The graphics are even more cartoony than WoW, but pleasant enough. I have settings at Ultra High and get 40-60 FPS with a year-old graphics card, but don't really see anything that would need much processing power. The music is great, favouring orchestrated, melodic music over ambient themes.

The tone of the game is tongue-in-cheek, with over-the-top humour. It's not grating enough to be annoying, but may not be everyone's cup of tea. You will not care about the fate of any character and you won't laugh out loud, but you may smirk and gently exhale some air every so often.

With questing being only marginally new, I dove into Player vs. Player combat as soon as it was available (Level 6) and have been leveling up through battlegrounds since then. PvP is very familiar for any WoW player, but the insane overlap of telegraphs really makes it hard to figure out what's going on at first. I've been playing as a healer, but even with add-ons, it's sometimes too hard to heal the group with any expertise other than button spamming. However, the playstyle itself is very fun, and the first battleground feels like a pleasant variant of Warsong Gulch. Teams are pretty evenly matched, but the graveyard respawn time feels a little long. Perhaps, I'm just not used to dying so much.

I haven't tried Adventures or Dungeons yet, and "RAID" is a four-letter word to me, so those aspects don't factor into my initial grade. Also, WoW has always had the built-in benefit of being full of old friends with shared history. It's too hard to make new friends in new MMOs, so I usually just do my solo thing.

B: Has its flaws but definitely shows promise!