Our weekend began last Friday night with a trip to the weekly free concert in Herndon. This week's band was Gonzo's Nose, playing covers for the largest audience we've seen in our many years of attendance. Apparently, someone has given cover bands permission to finally leave the 80s, as much of the last half of the set featured a bunch of music that no one over 20 cares about -- Carly Rae Jepsen followed by Miley Cyrus? 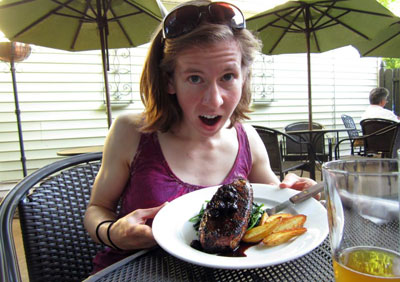 On Saturday, we went out to Harper's Ferry for an afternoon hike up to Split Rock. The parking lot was jam-packed with tourists, but luckily they all went to the quaint downtown, leaving the trails pretty quiet. We did a 7.72 mile hike up the mountain in less than four hours (including our rest time at the top) according to Rebecca's FitBit, which is currently in competition with Mike's FitBit -- either he's Forrest Gumping all over the United States, or he's overinflating his numbers by self-reporting at the end of each day.

After the hike, we went back to The Dish in Charles Town for some slightly pricey, locally-grown dinner. Rebecca got a pork chop the size of her head, and I had the scallops with bacon mushrooms.

On Sunday morning, Rebecca's church had a joint service with the Lutherans in Claude Moore Park. No battles broke out between the congregations -- it turned out that the true conflict for the ages was not between religions, but between the sun and really pale, white people. We spent the rest of the day relaxing, and ended with some grilled hamburgers and Hearthstone.