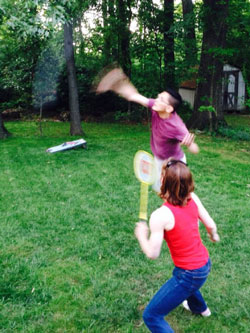 On Friday, I took the day off and burned through eight hours of coding to release DDMSence 2.3.0, with cats snoozing at various elevations around the computer and nearly an entire season of West Wing streaming into inanity in the background. This release adds support for automatic conversion into JSON, which means that if you haven't had any reason to use DDMSence in your daily life so far, you probably will not have a changed opinion today.

On Saturday afternoon, we took advantage of the pleasant weather and minimal mosquito population to have a barbeque. Plenty of badminton was played as well as cornhole, also known as the most effective way to cover your lawn in chalk dust in the shortest amount of time.

On Sunday, I learned about Scala collections in my online class, and did some laundry. In the afternoon, we started the first season of Derek, did a 3.9 miles run through Sugarland park and then ate barbeque leftovers for dinner.