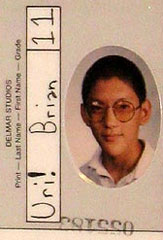 Nineteen years ago today, on January 29, 1995, I was a fifteen-year-old junior and right in the middle of the annual band trip. Fundraising that year must have been particularly worthwhile, as we scored four days in the assorted Disney parks of Florida. We probably had to sell something unsellable, like different varieties of sausages, but I managed to sell a grand total of 0 sausages by abusing my middle-class roots and flexing my dad's checkbook. This was fine with him, because I already milked my neighbourhood dry several times a year for Boy Scouts (tangelos and wreaths), and there's only so many times you can abuse the city councilman up the block for a guaranteed sale during election years. Sorry, Councilman Donley!

The trip involved multiple performances by the marching, concert, and jazz bands. Since everyone in the concert band was also in the marching band, a rudimentary understanding of Venn diagrams would suggest that you would do the least amount of work if you were in the jazz band and played an instrument that wasn't in the concert band -- this is why we all envied Isaac, the string bass guy. I must not have understood the concept because I was in all three bands and spent 50% of the trip putting on and taking off uniforms. (I took this lesson to heart, and would later get out of school to go on multiple Crew trips in the super important role of "backup coxswain"). 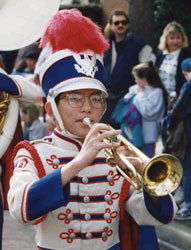 We left Alexandria after school on Friday afternoon and arrived in Orlando at 7 AM the next morning, forcefully reinforcing the band trip motif by staying at the All-Star Music Resort in the JAZZ wing next to a guitar-shaped pool. After a lunch at El Pirata (which has since been renamed as "Tortuga Tavern" to milk the pirate movie series that went on for 4 too many sequels), we marched through the park alternating between Military Escort and Freedom Finale. It was a decent performance, apart from the thirty seconds in the middle where everyone lost the beat and simply stopped playing for a bit -- we were the direct inspiration behind "dropping the beat". (You're welcome, Skrillex). At the end of this parade, we basked in the success of our first Disney experience until the logistics guys shooed us backstage again "to make way for the REAL parade". 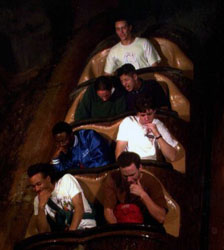 The next day (January 29th), we rode Space Mountain continuously until it was time for more performances. We did back-to-back concert and jazz band performances in "Fantasyland" which, as far as I know, was not a summary judgement of our greatness. The jazz band was better received than the concert band, playing such classic high school hits as Fudge Said The Judge and The Rufus Shuffle. In the evening, we had a private barbeque at the Wilderness Lodge and then returned to the motel to watch the Super Bowl (49ers beat the Chargers, 42-18). Actually though, none of us band nerds really cared about the Super Bowl as much as we cared about getting away from the chaperones, most of whom stayed in the park.

My three roomates, Dutton Hauhart and the Mikes, Stafford and Schoen, spent the evening throwing water balloons off of the balcony while hiding from hotel security, while I opted for the less risky activity of playing air hockey with Chris Sharp. A pick-up air hockey tournament formed soon afterwards, but it stopped being a game of skill after a flutist in a low-cut shirt decided to play. For unknown reasons, everyone wanted to play against her, but no one wanted to eliminate her from the competition. Also, everyone's shots got mysteriously weaker, barely crossing the center line, and requiring her to reach very far across the table.

Day three was Epcot day. We spent the morning in a workshop conducted by the Walt Disney World band director who was autographing photographs of himself like he was Bono. The afternoon passed with us searching for Epcot attractions where we didn't have to learn anything, and we dubbed the "Honey, I Shrunk The Kids" 3D show as the best ride in the park. After a terrible Polynesian Luau for dinner, we returned to the All-Star Music Resort for our final night. Somehow, our hotel room became the party room, although everyone was paranoid about getting caught. I fell into my standard awkward high school party role of "the lookout", and turned down the music every time a chaperone patrol passed our door.

Day four was the final day of the trip, and the only day without any band activities interfering with our serious ride plans. It was Mike Stafford's lucky day: he got a kiss from (the real) Snow White, and was randomly picked to ride the virtual reality machine in the Imagineering Labs. We left by bus late in the evening, and inhaled secondhand smoke all of the way home, from the bus driver who was apparently allowed to smoke on his bus in 1995.