Monday, August 21, 2000 was the first day of classes in my fifth year of undergrad. Having spent the previous four years surging at 18 - 21 credits per semester for the double major, I coasted through this semester with just 16 credits (much of it made up of music ensembles and lessons). 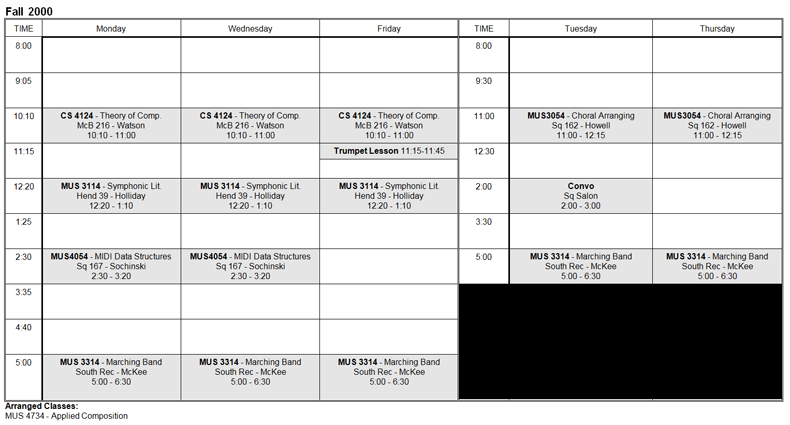 Figuring that I would be green, I learned the bus route from Foxridge Apartments on day one. However, my bus riding days only lasted for about a week before I switched to driving -- the act of waiting for a bus at the age of 21 imbues you with alternating feelings of being in elementary school again or being urbanly poor.

My first class of the first day was Theory of Computation and, true to form, I slept through the last twenty minutes of it. To this day, my only recollection of that class is that we spent the entire time discussing P = NP and hoping that someone would come along and prove it someday.

At 11:15, I had my lunch of fettucine alfredo, extra bacon, and nachos with cheese at Schultz Dining Hall, and then wandered over to the slightly-haunted Henderson Hall for Symphonic Literature. This was the first semester that this building was used for music classes, having previously been the home of medical-related stuff, so I probably picked up a few types of cancer from all of the leftover X-rays bouncing around the asbestos-lined building.

At 2:30, I had "MIDI Data Structures", which was a crossover class between CS and MUSIC with only 2 students. Billed at 3 credits, it only met 2 days a week officially, and informally met whenever we felt like getting together. By the end of that class, I was able to write a Java Swing app that could playback standard MIDI files.

After marching band that day, we all went over to the New River hospital to see Shac, who had come down with some mystery malady over the weekend, but who was feeling much better by the time we arrived.