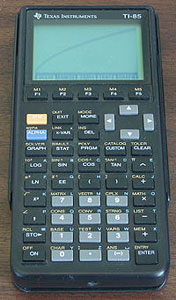 I enjoy rereading Steven Levy's book, Hackers, on occasion, but am sometimes disappointed that I was born just a few years too late to really appreciate the evolution of the personal computer. Though I probably gained some retroactive credibility by publishing my text adventure game (fifteen years too late), I never threw together a stick-figure game and sold it in a Ziploc bag -- my 1980s resume consists of reams of unfinished BASIC games and an MS-DOS batch file that I modified for Jack Wilmer so it would insult his sister whenever she tried to play Sierra On-line's Eco-Quest. There was only one area where I was ever legitimately a technology pioneer: video games on graphing calculators.

In 1993, graphing calculators were the laptop of a public school generation. Prophetic initiatives to get one graphing calculator for every kid in school were even accompanied by the worries that kids would steal them or sell them for cash (because Alexandria is just teeming with pawn shops). Even before No Child Left Behind, T.C. Williams High School was a "Harvard or HVAC" school, and you could make completely wrong assumptions about who valued their education by whether they owned the TI-85 graphing calculator or the cheaper "free school breakfast" TI-83.

At first, the TI-85 was merely a cutting-edge tool to facilitate cheating on math tests, not that anyone ever stooped to such a level. This all changed in March 1994, when classmate, Randy Reddig, arrived at school with a copy of Break-Out!, a classic game where you knock a ball around a screen with a paddle, breaking bricks. (I just looked Randy up, and apparently he went on to become one of the co-founders of Square, the company that lets you swipe credit cards on smartphones). 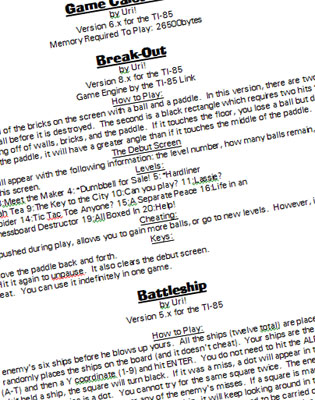 Being able to play a game during class was a novelty in and of itself, but I was more interested in how it was done. Over the next month, I used Break-Out! to learn how to program TI-85s (in TI-BASIC) and rewrote the game from the ground up. Ten levels became twenty (becoming my first and only application of a matrix as a data structure), the velocity of the ball would change based on where you hit it with the paddle, each level was decorated with fancy 2-color graphics, and you could even pause the game and hide the screen when a teacher walked around.

Writing games for calculators wasn't easy, because each came with 28KB of memory (and 4-5 KB had to be reserved for those pesky programs that did legitimate math computations for class). I resorted to all sorts of unhealthy tricks that would get a programmer fired today, like renaming the calculateBallVelocity function as a and stripping out all of the whitespace. In some cases, the code would write more code, so that static data could be unpacked while the game was running but then free up the space at the end.

After doing everything I could think of to Break-Out!, I decided to branch out with Battleship and Connect Four, notable only because the computer opponent had a bare minimum of artificial intelligence. I also started working on Whack-a-Mole before running completely out of memory. The games had the side effect of raising my profile with the popular kids, because everyone wants to know the guy who can get them games to play in the classroom. On the downside, most of the notes in my yearbook from cute girls assumed that I was predestined to become a calculator programmer, which probably doesn't appear in any Top Ten Jobs list.

So where are all of these games today? Well, sometimes when you drop a TI-85 on the ground hard enough for the batteries to fall out, the memory clears. This happened sometime around 1999 which means that if there is a copy of URI! GAME CALC floating around out there today, it belongs to someone I went to high school with who has treated their calculator with the utmost respect, and religiously replaced their batteries on a yearly basis.