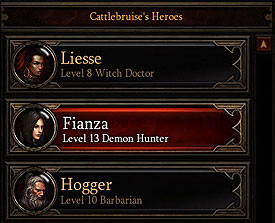 This weekend was open beta weekend for Diablo 3, which gave everyone the privilege of trying and failing to login to overloaded servers. I reconnected with some old friends who are still inexplicably playing World of Warcraft regularly. It brought back memories from twelve years ago, when I first started working at FGM (upon the release of Diablo 2) and my officemate, Rick, would open every day by itemizing all of the loot that he had gathered the previous night.

My plan to mow the lawn on Saturday was thwarted by the rainstorm. Rainstorms are procrastination personified -- they get you out of yard work, but then the grass is twice as high and harder to mow by the time the ground dries out. On Saturday night, we went to Frank's (of Frank and Amanda) birthday party in Oakton. Rebecca was amazed that most of the guys were talking about Diablo 3, so I had to give her a nerd anthropology lesson on how the previous game was released in the life sweet spot where all guys were majoring in social ineptitude in college.

On Sunday night, we ate three cheese pizza and watched another episode of Boardwalk Empire, yet another HBO show where all of the characters look the same and new ones continue to get introduced. It's entertaining so far, but it's no The Wire.