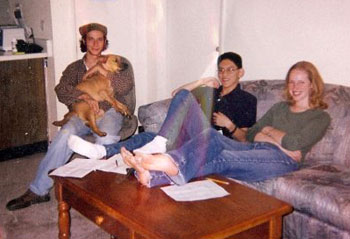 The entries from the URI! Zone from ten years ago are a little bland -- starved for content, I was doing full week reviews of the music of Steve Reich, followed by a montage of young adult authors I enjoyed as a kid. Off the web, I was closing out my first year as a music grad student at FSU.

On the night of April 10, 2002, Kathy and I had our near-weekly ritual of Movie Night. The number of movies I went through while living in Tallahassee is astounding -- as if I was trying to stave off an end-of-the-world scenario of peak-DVD. Kathy came over to my "when you build it out of cinderblocks, it's like you're sleeping in a classroom" apartment at Parkwood, where we made two Totino's Pizzas (with assorted bits of unnamed meats, before their salmonella scare) and sat on the most uncomfortable couch in the world.

I actually couldn't remember the name of the movie we watched that night, but luckily, Kathy records every event she's ever participated in with a series of historical day planners. That night's movie was Zoolander, and the fact that I never mentioned that on my website or in my journals ("April 11: Movie Night was fun.") probably means that it had very little impact on my life. 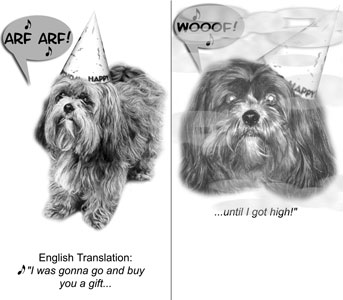 On the Saturday that followed, I went out to celebrate the birthday of Angela, a fellow composer who once made some "special" brownies, only to lose them when her dog sneaked into the kitchen and devoured the batch (the dog was fine). I remember hanging out for an hour in some random restaurant with a really loud jazz combo before heading home to find out where everyone was (pre-cell-phone), only to find that they had all just arrived.

In the academic world, I was assistantship-less, since they forgot to build the electro-acoustic music lab I was supposed to administrate. I was taking Pedagogy of Music Theory (or the art of creating a binder full of outdated articles) and Fugue. I was probably putting the finishing touches on my final project, Le Fugue, a full frontal contrapuntal masterpiece.

This was also the final week before a concert performance of Badinage, a trumpet and piano piece which I decided to perform myself with Rob Kelley on the ivories (because performing your own piece is easier than meeting a good trumpet player). The piece was a highlight of FSU musical history, as exemplified by Professor Ladislav Kubik's post-performance remark to a seatmate: "Well, that was an ambitious piece..."