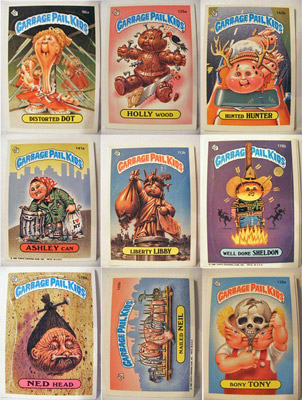 Back in the late 80s (the ladies), one of several passing fads were the Garbage Pail Kids trading cards. These cards were a grotesque parody of the Cabbage Patch Kids, and came bundled in 5-packs with a stick of gum. The characters on the cards had punniful names, and to increase the need to buy additional cards, every picture was printed with one of two possible names.

Collecting trading cards is annoying, except when your parents buy everything in bulk quantities. I was never able to complete the 100 card set for The Dark Crystal, since we only purchased them in 7-Elevens, but when it came to Garbage Pail Kids, we got twenty packs in a single afternoon and immediately ate all of the gum.

Of course, the problem with circumventing the society rules on collectibles, is that there's nothing to look forward to when you have a complete set, and you end up with a ton of multiples on the least rare of the cards. The obvious solution, is to invent some sort of alternate game to play with the cards instead. In our case, it was UNO. 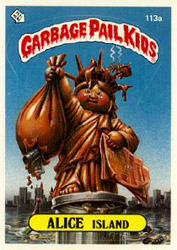 The rules for GPK UNO were about as simple as you might expect for a game invented by nine-year-olds. The color of the background behind the character names became the UNO suit and playing a card with the same picture but an alternate name allowed you to Skip and Reverse. The horizontally-oriented cards became the Draw Twos and Draw Fours, with Tongue-Tied Tim and his counterpart as the scariest cards in the deck.

The games worked out surprisingly well, considering that we had a deck of 200 random cards and no professional background in game making. No doubt, this paved the way for my future game ideas of Clue and Island of the Blue Dolphins.

What sort of games did you invent as a child?