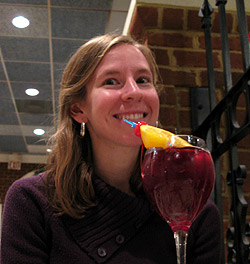 For this New Years weekend, we took a trip down to Colonial Williamsburg which was a very good balance of traveling between "way too much time spent in the car" and "let's get Boston Market for dinner tonight". The temperature stayed in the 60s the whole time (and obviously all of the snow had melted by the time we arrived).

We shacked up at the Magnolia Manor, one of seven thousand Bed and Breakfasts within walking distance of William & Mary, notable for its gigantic whirlpool bath tubs and staff that walked a comfortable path of being accessible without hanging around all of the time. The three basic food groups for each morning's breakfast were potatoes, eggs, and bacon, in various permutations. This is a definite "win" in my book of successful breakfasts.

After a dinner of five shared sangrias and a prime rib cooked so rare that it was linked in a blue font, we participated in the Williamsburg "First Night" activities: a set of community musical performances at various venues around town. First up was an Native American storyteller, followed by a pleasant community swing band with more verve than talent. We opened the new year by watching the fireworks display from the comfort of our room, since they were launched just two blocks away from our window. 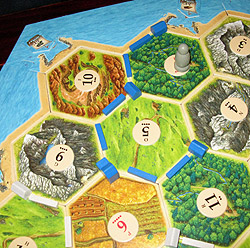 On Saturday, we wandered through all of the parts of Colonial Williamsburg that did NOT require us to pay the ridiculous $36 admission fee and had giant, greasy sandwiches at Paul's Deli. We saw deer gallivanting in the fields around the Governor's Palace by moonlight, and ate all of the samples in the Peanut Shop. Finally, we returned to our swank two-room suite at the Manor and played multiple two-player variants of Settlers of Catan, where I got lots of sheep.