♠ Happy New Year! We've got one full week down in 2011, but there's still no sign of flying cars or people on Mars. Obviously, pop culture movies are not a good foreteller of the future. Thinking back to 1997, I don't believe that Skynet was anywhere near sentient, although I may have seen a few Eliza clones in one of the chatrooms I used to frequent. 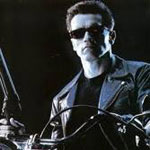 ♠ Since I knew the original Terminator 2 movie by heart, it was a little jarring to watch to special edition with about 20 minutes of extra footage recently. For the most part, the additions actually improved the final picture, although the beginning dragged a little too much.

♠ They also cut out a whole sequence which explained why this particular Terminator was able to learn new concepts -- it seems to me like that really should have stayed in the original movie, but maybe James Cameron didn't want to give away all of his secrets to the people who would eventually found the Roomba corporation.

♠ Now that the movie industry has made every possible sequel and used up all of the childrens' books (other that The Chronicles of Prydain starring Michael Gambon as Dallben), perhaps its time to start reimagining the old sci-fi movies with our current understandings of technology. For example, we probably won't be advanced enough to send a liquid metal Terminator back in time, so the villain would probably more closely resemble a really pissed off Zhu Zhu hamster.

♠ I had read The Chronicles of Prydain multiple times before I even left the third grade. I remember a girl in a sixth grade Talented and Gifted class complaining about "The High King" being too hard to read because "there are too many thee's and thou's in it!" I also owned the Sierra On-line version of The Black Cauldron for PC, and died many times on the obligatory Sierra cliff-climbing sequence.

♠ I think every Sierra game had at least one section where you had to ratchet game speed down to Slowest while you navigated a narrow path up or down a mountain. One pixel too far would send you tumbling to your death, but thankfully there were only 320x200 pixels to worry about. 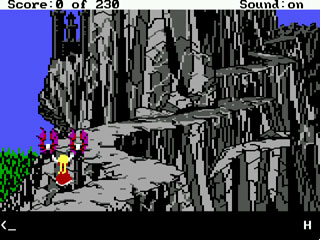 ♠ The most egregious offender in the "fall and die" approach to game challenge was King's Quest IV: Perils of Rosella. That helpless hussy could fall off a SINGLE STEP onto the grass and your game would be over. Wouldn't game designer, Roberta Williams, have been an apt candidate to dispel the myth that girls are fragile? Come on, Roberta!

♠ Plans for the weekend include a visit with Paige and Matt this evening before they wend their way back to Russia or Houston or wherever they camp now. Tomorrow, I'm going to fix a couple leaky toilets in the house (because I've had it up to here with poop on the floor?) and then we're heading to the post-Christmas party of i-less Page. We have no plans for Sunday yet, so maybe we'll plow through some of the many unwatched movies that seem to be on our shelves these days.

Pet lovers hope to get new law on wills