the stage was surrounded by screaming groupers, probably there to see the bass player

♠ This has been an incredibly long week, during which I was sick and still working, so I really have nothing new to report, other than the fact that the census ends on Monday, and people who comment after Monday at 6 PM will not be able to win the cash prize, which in my economic opinion, is very fiscally irresponsible of you and highly deserving of this horrible single sentence paragraph.

♠ In non-BU news (Byews), Rebecca has finally left the T-Shirt business to go back to school for physical therapy, so if you were hoping to get further discounts on soft dryer-unsafe shirts hanging off of anorexic androgynous models, you are now officially too late to the party.

♠ The problem with living with chicks is that they have so many articles of clothing that cannot go in the dryer that a drying rack is a necessity (thanks, Larry). Gone are the bachelor days when I could just get everything one size too large and haphazardly throw it all into the dryer on HIGH HEAT ROUGH AND TUMBLE RUMBLE -- now I have to pick through the damp clothes to extract this cotton sweater or that fuzzy kitten. 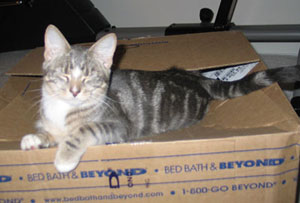 ♠ Disclaimer: I have never actually put a cat in the dryer.

♠ Disclaimer #2: There has been one in the washing machine, but she went in herself and it was not turned on.

♠ I have no set plans for the weekend, although I'll probably take off pretty early today since I'm already hovering around Overtime Land and it's the end of the pay period. If anyone has mischief planned that would be augmented by the presence of an Asian, let me know!

♠ Have a great weekend! Only six more weeks until Kelley dies in basic training!