The URI! Zone turns 14 this month, and if mandatory primary education was a requirement for websites, it would be placed firmly into the eighth grade. For the coming year, expect to see numerous posts attempting to increase the site's popularity through slander and picking on the nerdy websites, coupled with the occasional embarrassing crush on websites of the opposite sex. I don't really know how you can determine the gender of a website (maybe "View Page Source" would work) but in my opinion, the URI! Zone is definitely a dude. 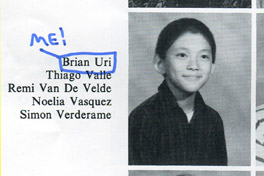 To celebrate the milestone of surviving for fourteen years without dying to lack of interest, lapsed domain registrations through really bad webhosts, and the possibility of a mass exodus of readers following too many posts about Alias, Les Mis, or having sex with day labourers behind 7-11, I have posted a yearbook picture of what I looked like in the 8th grade. Unfortunately it's not a one-to-one match, since I was actually 12 in the picture, not 14. This is probably because I was smarter worked much harder than my website.

The presence of a scanned yearbook picture should also clue you in to the fact that I finally purchased a new scanner, months after the old one exploded: an Epson Perfection V30 that's half the weight and twice as fast as my previous HP model. This means that everyone's favourite feature, "Stuff In My Drawers Day", can resume with impunity. I have some other possible features being focus-grouped right now, including "Crud I've Cleaned Out of Booty's Ears Day", "Pictures of Our Scrabble Games Day", and "Mensday Wednesday", where I talk about steak and boobies. 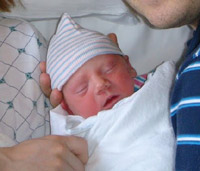 I also asked several notable souls in my circle of life friends to commemorate the Fifteenth Edition of the URI! Zone in some extravagant way, and they graciously responded by having babies: You can all welcome Alexandra Jean Morton and John Whittingham Wilmer, IV to world! The I-V on the end of the name means that John will probably end up at an Ivy League school, most likely Princeton. Congratulations to the new parents!

Thanks to everyone who has visited my site over the years! Because of your continued interest, "urizone" is much, much more than just a South African drug for yeast infections.

Come live in the house of meat