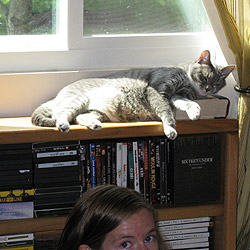 If you were to embark on a round of self-esteem lowering word association with my cats, some of the words that might come to mind as you think of Booty might be "EAT", "FAT", and "SPANX" (only the last of which would get you a high score in Scrabble).

Much of our daily routine is devoted to preventing a continuous 24-hour intake of food -- had the Macondo rig been spewing kibble instead of oil, Booty would have been a fast, cost-effective solution to the problem. We've moved her mealtimes from 6 AM and 2 PM to 2 PM and 10 PM so she doesn't wake us up in the morning (as much). When mealtime rolls around, she'll knock small trinkets and remotes off of tables, or shred paper products (like bills or paperback books) until we acknowledge her starvation. 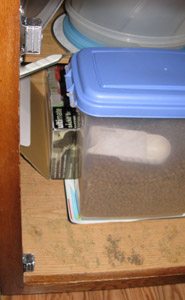 To handle the off hours when we're out of the house or trying to sleep, we relied on a child-proofed cabinet -- a plastic latch that allows the cabinet to be opened about two inches, after which you must push down on the plastic tab to open the door the rest of the way. (It should be noted that this wasn't originally for Booty or even a child in search of Mr. Yuck stickers -- it was installed for a previous food-addicted cat, Sydney, who once ate a jar of vitamins).

Sometime during our Puerto Rico trip in March, Booty finally learned how to beat the plastic latch, and a few times since then, we've come home to empty food containers and telltale signs of binging, like atomic fatcats or honking. Last week, she decided that she would make music all night long by clicking the door open an inch and then letting it slam shut. This reminded me of any given jazz concert where the conga drummer finally gets to solo, but isn't quite sure what else he can do after he puts his elbow on the drum for a few minutes.

Since then, I've replaced the dinky plastic lock with two industrial magnets, which are so strong that they can pull the door closed from about a 40 degree angle. So far, Booty has been unsuccessful in thwarting this new deterrent (although I have caught her studying the principles of Mag-Lev trains in the basement). We shall see how long the current peace lasts.

How long will it take Booty to get to the food?

The magnetic fields will destroy your brains and your credit cards first. (0 votes, 0.0%)