♠ Nestled in the bosom of all the DDMSence and work that I've been up to, I found some free time unclaimed by lame sci-fi books and decided to pick up a key for the Starcraft II beta (using my elite credit card connections with Amazon.com). 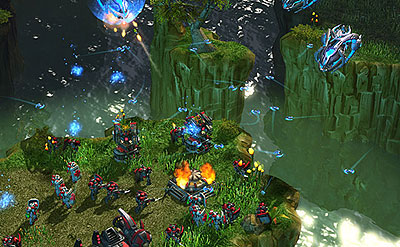 ♠ I've only had time to play four or five games so far, but it seems like a good blend of familiar and new: the charm of Starcraft I mixed with the interface of Warcraft III. It even comes with a grid-based hotkey mapping built-in (where all the keys you hit are in the QWERT area so you don't have to memorize the first letter of each action).

♠ In the image on the right, the Protoss ships are apparently trying to fertilize the Terran outpost.

♠ The only thing I don't like about the game so far is the fact that there's a 12-character limit on your screen name. This takes my overtly witty handle, CattleBruiser, and truncates it to CattleBruise, an enhancement that gives it all the menace of a terrier on a tricycle.

♠ I've had surprisingly few online handles in my fourteen years on the Internet, but CattleBruiser is probably the most well-known. What handle was I using when you met me? Answer the poll in the sidebar!

♠ In the spirit of twelve character limits, today's Fragments column will be truncated -- mainly because today is a busy day at work and yesterday, I went out for sushi instead of writing salaciously interesting fragments.

♠ Plans for the weekend include, unsurprisingly, work and some Starcraft. Rebecca has a wedding shower to go to on Sunday, and I get to play my penis card and stay home. Have a great weekend! April is over!

Cats and dogs are household hazards

What online handle was I using when I met you?