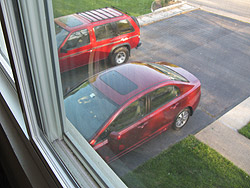 Look! A new car! (Parked next to a jeep that no longer runs but does a great job of keeping the pavement dry!) We spent three and a half hours on Saturday morning at Tysons Honda purchasing a Civic EX and avoiding the slinking salesman we disliked from the previous visit who smelled money and was trying to get in on the action.

After driving the car around for a while to show it off and to encase it in a fine protective layer of pollen, we had lunch at Panera with Emily Green, and then came home for the first poker game of 2010, which Chris handily won.

Sunday was parent day, and opened with brunch at Foxfire Grill with the in-laws. Afterwards, we stopped in Arlington to say hello to Jack and Kristy (to put some meat in the parent sandwich), and then had rib roast for dinner at my parents' house.

Now that the car-shopping segment of 2010 is over, it's time to start planning some vacations so I can use up my 24 days of leave I have remaining. Maybe Washington state in July? The beach in September? Both? Maybe Sam and Kristen can uninvite some annoying relatives from their wedding and use the money to come to the beach with us instead.