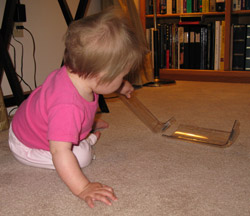 On Friday evening, Anna & Ben (of Anna & Ben) came over for steaks and babies. We also played multiple games of Simpsons Clue, where I put my patented system for monitoring others' responses to work and won game #2.

On Saturday, while Rebecca was off at a birthday spa outing with her college friends, I released DDMSence v1.2.1, read and finished the next Orson Scott Card book, and then joined the birthday outing in Annandale for dinner at a 24-7 Korean BBQ restaurant. I had never had a particular craving for Korean BBQ, even during normal business hours, so I don't think I would fully appreciate the flexibility for 4 AM dumplings that they have built into the schedule. Dinner was followed with a trip to Cafe Muse, a coffee-shop-turned-speakeasy but with private Karaoke booths in the back, rather than moonshine. Judging from the foot traffic past our booth, Koreans really love their private Karaoke.

On Sunday, we wasted about seven hours watching 2012 and then went shopping at Bed, Bath, and Beyond, where we purchased a wedding shower gift, and did NOT purchase the "Filet-o-Fish Frankie Fish" singing fish for sale near the registers. After shopping, we returned home to wash the cars and eat a multitude of leftovers for dinner.

What did you do with your weekend?