♠ I'm feeling better now, having subsisted solely on ibuprofen and Nyquil for the past week, instead of the wussy antibiotics I surrendered to the last time I was laid low by major illness.

♠ There was actually a very slight chance that it could have been swine flu, since I work with a DBA who spent last week on a military base five miles from the Arizona-Mexico border. This is the same guy who also lived in my basement in 2004.

♠ I never did take Jim Barry's idea to turn my basement into an extended stay residency location for needy composers. I guess I like my leases to end eventually. Zing! Although honestly, the music performers are struggling just as much as the music composers right now.

♠ My idea to solve this famine is to initiate an infinite loop (because infinite loops are the solution to any devious software engineering problem). Simply have all the composers pay all the trumpet players to play their music, and have all the trumpet players pay the composers for the chance to play the latest and greatest sonata that can only be described as a cross between the Halsey Stevens and the Peeters with hints of Hindemith (I think I had ice cream in Collioure, France that tasted like that, mostly because of the liberal dousing of Grand Marnier). 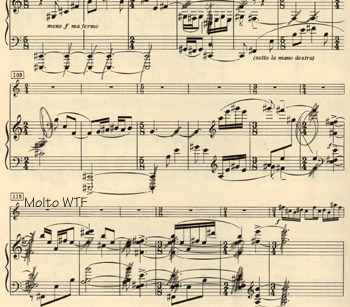 ♠ The Halsey Stevens sonata is constantly shifting between meters like a DC cabbie with multiple personalities. I performed it with the accompanist from hell, whose last name starts with an S and rhymes with "Padowski". She scribbled out any notes that ended a tie because they kept confusing her, rendering my $15 score about as useful as Roomba in a fishtank or the traffic light they're installing on Beech Road. Also, I'm allowed to have $15 scores because I'm a musician -- everyone else needs to find a higher class of prostitute.

♠ This accompanist was the same one who cancelled on me minutes before a Convocation performance, and then forgot to show up for the rescheduled performance the following week at the same time. I looked her up online and she's now a music teacher in Arlington. It's like everyone but Paige gives music educators a bad name.

♠ I haven't heard from Paige in weeks and her blog has fallen off the Bloglog, so I'm presuming that her baby ate her. 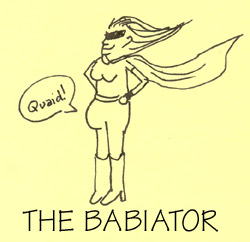 ♠ "The Babiator" would be a great name for a superhero whose superpower was masterful use of the reproductive system. I'm guessing her Kryptonite would be condoms and practical sex education classes, but she could shoot babies at her enemies like giant cognitive watermelon seeds.

♠ This weekend is shaping up quite well. On Saturday night, we're going to celebrate the fact that Mike (of Mike and Chompy) will be moving to Massachusetts to teach ear training to wicked Bostoners. Then on Sunday, Rebecca and I will be taking a trip to Solomon's Island, Maryland, where we'll take a break from job stress and swine flu to stay at a Bed & Breakfast, dig for shark's teeth in Calvert Cliffs, and learn how to speak Marylander. We won't be back until Monday afternoon, so there will be no new posts until Tuesday.

♠ I've missed writing things for all you clowns -- thanks so much for staying patient and visiting daily in spite of all the boring Just Plain Days, which should really just be relegated to bagel flavours and the Midwest. Have a great weekend! I will.

Cash flies out of convertible