random excerpts from my first year of grad school

♣ September 3, 2001: Yesterday evening, I went to the department head's house for a music theory welcoming picnic but it's actually next week. Luckily no one was home so I didn't look completely dumb. 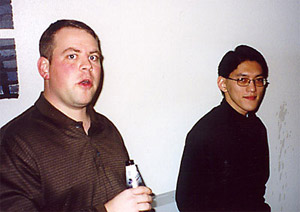 ♣ October 14, 2001: Mark was drunk and telling Kathy his opinions of people in our Pedagogy class and labeled me as the "quietly competent" one. I've heard that before...

♣ December 1, 2001: In the afternoon, I went out to eat with Mark, Mike, and Beth, and then Mark, Mike, Jim, and some other composers went to Irish Pub with Dr. Wingate for happy hour. I split a whole pitcher of Heiniken with Mike. The outing ended up becoming a bitch session about the bureaucracy of the composition/theory department which was stupid. 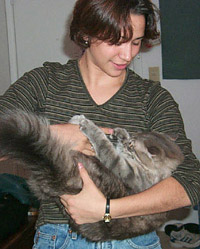 ♣ December 12, 2001: I hit part of a ladder on the road in South Carolina but survived, and then hit five miles of dense dense fog in southern VA. [...] Anna and I also went across the street to say hi to Philip and Kelley. Kelley wasn't home so we watched Philip play Abe's World on his X-box then went home.

♣ February 1, 2002: Today was a pretty good day, despite my MWF pedagogy class being horrible.

♣ February 23, 2002: I left Mike's around midnight when some of his louder friends showed up.

♣ March 25, 2002: Anna broke up briefly with Ben last week but it was over quickly and now they're back together.